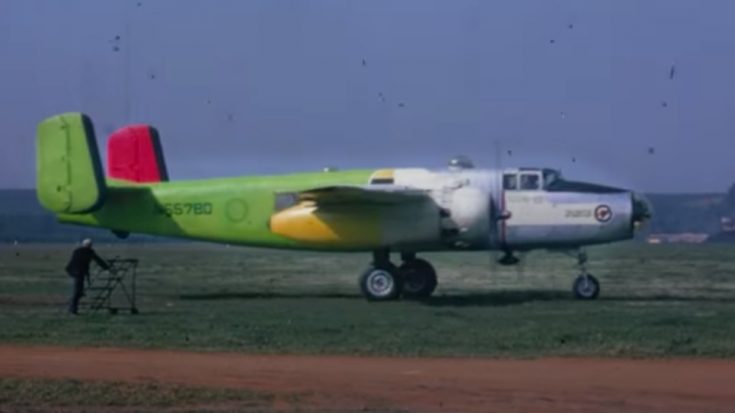 The 1969 film “Battle of Britain” is a classic WWII movie staple. Fans love the dedication to detail and, of course, the incredible flight sequences. Many of those epic air shots were possible thanks to one of the world’s most memorable camera planes – the B-25 Mitchell “Psychedelic Monster.”

Painted bright red, green, and yellow, the B-25 bomber certainly drew attention. That was a good thing, of course, as its colors helped other aircraft find it in the sky.

It also had a handful of plexiglass windows for filming a variety of angles. A rig in the bomb bay could be lowered by remote control for even more shots. The tail remained completely open.

The nose camera was kept covered by a special fabric shield that would only be released after takeoff when the B-25 was high enough above the bugs. Imagine if there’d been bug juice stuck on the glass in one of those battle scenes!

After filming, the Psychedelic Monster returned to the United States where it was unfortunately not well taken care of. Eventually, it was rescued and rebuilt by Tom Reilly of Kissimmee, Florida. However, it passed through many more hands and once again fell into bad condition in the 2000s.

But in 2014, the colorful old beast finally got some love from Reevers Warbirds in Australia. The beloved bomber is getting a full war-time makeover – the last update shared that they are waiting on some rear turret parts to ship from the U.S. This is some exciting news!