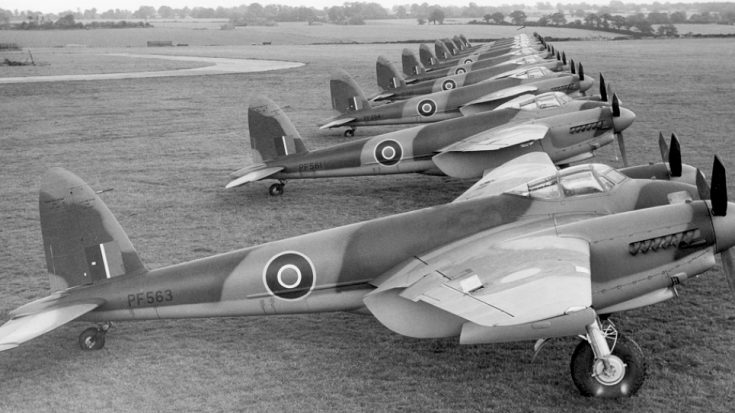 Ah, the Wooden Wonder. De Havilland’s Mosquito was at first met with skepticism thanks to its all wooden design, but this twin-engine multi-role genius of a plane didn’t disappoint.

Here are 6 quotes about the Mosquito, for better or worse:

“The first thing that struck one about the Mosquito was the beauty of line of the fuselage, tailplane, fin and engine cowlings. They all went together and made a lovely aeroplane. The cockpit cover also had a sweet line and the simplicity of the undercarriage and the treaded tyres set the whole thing off. The aeroplane sat on the ground looking pert and eager and it was easy to become fond of – which was by no means true of all aeroplanes. -Frank Russell, Mosquito B IV navigator

The Timber Terror is a lovely creature, isn’t she?

“This airplane has sacrificed serviceability, structural strength, ease of construction and flying characteristics in an attempt to use construction material that is not suitable for the manufacture of efficient airplanes.”

Ouch. Many thought the development of a wooden airplane was a complete waste of time. In fact, the Air Ministry tried to block production completely. They couldn’t have been more wrong.

3. She Could Be Difficult

“…a slightly nervous thoroughbred which could perform impressive feats in the hands of the courageous and competent…but would occasionally deal out a kick or a bite.”

She wasn’t easy to fly, but she could be flown exceptionally well.

“I’m often asked, what type of aircraft saved Britain. My answer is that the Mosquito was particularly important because it wasn’t just a fighter or a bomber. It was a night fighter, a reconnaissance aircraft. A ground-attack aircraft. It was a multi-purpose aircraft.”

The Spitfire and the Hurricane, as fighters, usually get all the credit for saving Britain. But the Mosquito could do things that no other single plane could do.

5.  More Remarkable Than The Lancaster and Maybe Even The Spitfire Too

“The Mosquito helped transform the fortunes of the bomber offensive. It was obvious that this was a real gamechanger. In many ways, from the outset it became plain that the Mosquito was a much more remarkable aircraft than the Lancaster…You’ve got the range, the height, the speed. It can do anything and in that sense, I think some of us would argue this is a more remarkable design achievement than the Spitfire.”

6. Göring Was Green With Jealousy

“In 1940 I could at least fly as far as Glasgow in most of my aircraft, but not now! It makes me furious when I see the Mosquito. I turn green and yellow with envy. The British, who can afford aluminium better than we can, knock together a beautiful wooden aircraft that every piano factory over there is building, and they give it a speed which they have now increased yet again. What do you make of that? There is nothing the British do not have. They have the geniuses and we have the nincompoops. After the war is over I’m going to buy a British radio set – then at least I’ll own something that has always worked.”

The highest compliment the Mosquito ever received is this angry statement from Göring. A Mosquito famously knocked his broadcast off the radio during a speech.

What do you think of the good ol’ Mossie?