RC Dornier Do X With 6 Engines Tears Through The Skies 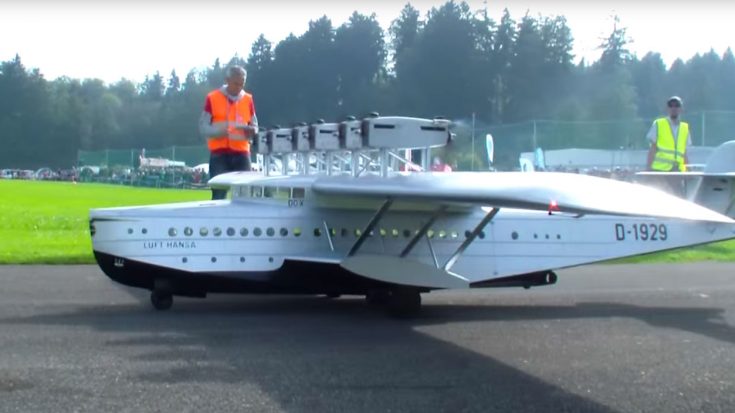 When it was introduced in 1929, the Dornier Do X was the biggest plane in the world. The Dornier DO-X flying boat would reign supreme as biggest until 1942 when the Boeing B-29 Superfortress was introduced. Now the iconic flying boat has been miniaturized as an RC model, but it’s still pretty damn big.

The Dornier Do X was developed as a long-range luxury airliner created by Dr. Claude Dornier. The flying boat could accommodate 150 passengers, featured three separate decks which included a dining area, smoking room, full bar and sleeping berths. Only three Do X units were built and ultimately went into financial problems and the plane’s use was discontinued.

“The Do-X made its first test flight on July 12, 1929. A few months later, it carried a world-record 169 passengers on a 40-minute flight. Passengers were asked to move from one side of the cabin to the other to help the captain bank into turns.”

Now an RC model of the Do X takes center stage at the Flugtag Hausen airshow. This RC is massive, eclipsing the sun as it flies overhead revs its six engines. The real Dornier Do X may not have been able to get more than 40 feet off the ground but this RC can really soar.

Fun Fact: Although it was popular with the public, there are two reasons why no more than three Dornier Do X planes were manufactured – non-fatal accidents AND the lack of commercial interest in the aircraft.

It’s a spectacular model but it sure makes us nervous watching it fly mostly because we know there’s so much work and skill involved in creating this. And not only does it look stunning, it sounds almost like a real full-scale aircraft too!

So we can’t help but wonder, how much did this whole project cost? And how long did he build it?