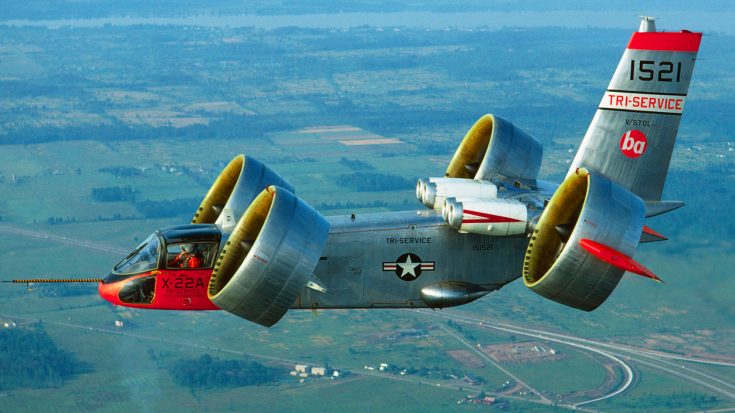 When flying in an aircraft you aren’t always guaranteed the best terrain in the world to take off or land from. Landing and takeoffs also require a lot of space which is also isn’t always likely to happen. Vertical takeoff has always been a desired feature for aircraft and one of the first planes to implement it was the Bell X-22.

Powered by four ducted fans the X-22 made its debut in the mid-1960s. It was a spacious aircraft with seating for two pilots and up to six passengers or a maximum payload of 1,200 lbs. It could hover to a height of 8,000 feet, fly at speeds just over 300 mph with a range of 450 miles. Two X-22 prototypes were built and tested, but sadly one was lost to a crash caused by problems with hydraulics.

In the end, the X-22 remained an experimental aircraft because the designs were not quite up to the standards of what the Air Force was looking for. However, the X-22 did provide excellent data to further the research of future vertical takeoff and landing aircraft. Here is a clip of the Bell X-22 in a trial run at various altitudes.