Sensational Footage Of USAF’s Biggest Plane Will Leave You Breathless 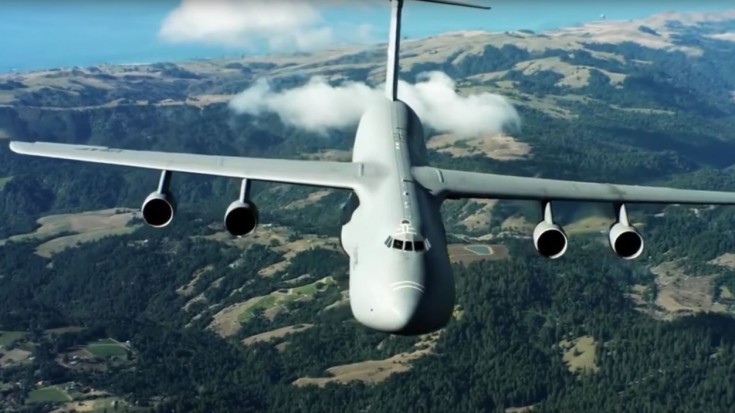 The Giant In The Skies.

The U.S. Air Force has a wide variety of planes in service each with their own specialty, some go faster, some hit harder, but only one claims the title of the biggest and that is the Lockheed C-5 Galaxy.

A giant among its peers this strategic airlift has a staggering wingspan of 222 feet, a length of 247 feet, includes seating for 81 passengers and can achieve flight with a cargo load of 420 tons. Perfectly suited for transporting heavy-duty vehicles such as tanks and helicopters the C-5 Galaxy is an amazing aircraft has stood the test of time and has aided the U.S. Military in every major conflict since the Vietnam War.

“The C-5 Galaxy is specifically designed to transport all types of military fighting equipment and associated personnel. The entire spectrum of military inventory, anything and everything that the Army ever intended to be airlifted, rolling and tracked armored equipment (including main battle tanks), bridge launchers, helicopters, bulk cargo, troops, etc. can be transported swiftly and efficiently aboard the C-5. Inflight refueling capability gives the aircraft nearly unlimited range and increases its flexibility for troop and cargo delivery.”

In the high-resolution video that follows we get a beautiful look at a C-5 Galaxy during a loading operation and even more spectacular footage while airborne. Truly a sight to behold the massive C-5 Galaxy can take our troops and everything they need anywhere to protect the world.