The Most Important Skill For An Aircraft Gunner 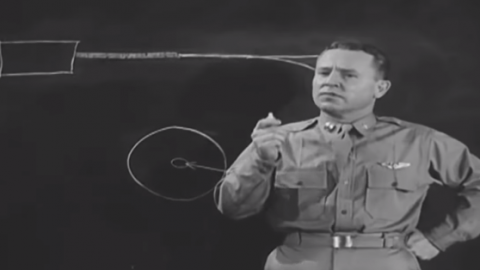 Give It A Shot.

Before warbirds were fitted with machine guns, especially during World War I when planes functioned for aerial reconnaissance, pilots had to carry rifles. In WWII, there was a huge improvement in terms of aircraft weapons. And well, they are extremely bad ass.

Take a look at this short documentary on how they work. What I found interesting is the guy who’s doing the comprehensive training (which is impressive, by the way). If you’ve seen a number of old military videos such as this, you’d probably think it’s the same voice. Because that’s actually the first thing I noticed. Somehow, it’s amazing that I finally got to see his face.

Anyway, it just makes you realize how terrifying it was back then especially when he says, “That is where you’ll be in a few weeks”. These men had guts, so much respect for their courage and bravery.