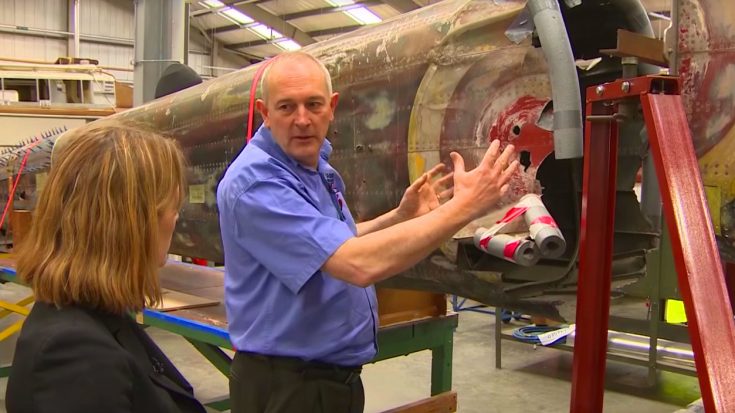 The Hampden Bomber has seen better days, once there were over 1,400 but now only three survive. Those three survivors were pulled together from decaying wrecks and none of them are able to fly. However, a repair team at the Royal Air Force Museum in Cosford is determined to see the Hampden Bomber fly again.

Debuting during the early years of WWII the Handley Page Hampden was a medium-sized bomber. It participated in bombing raids over Berlin but it was soon found that it was not as suitable for combat as bombers and retired in 1943.

This particular Hampden was part of the 144th Squadron of the RAF during WWII. It was tasked with protecting arctic convoys en route to Russia when it was shot down by two Messerschmitt Bf 109s in a surprise attack. The decaying remains of this plane laid frozen in the Russian ice until 1991 when it was recovered and sent to the Royal Air Force Museum where it has remained to this day.

“They encountered anti-aircraft ground fire but were soon being hounded by two Messerschmitt Bf109’s. Flt.Sgt. Miller in the Hampden’s nose called out instructions to the pilot to help him avoid fire from the Messerschmitts, but the Hampden was no match for the agile Luftwaffe fighters. The pilot declared that he couldn’t outwit his attackers and decided to attempt a forced landing. Three crewmen died in the incident, while the pilot sustained serious injuries.”

The staff no longer wants this bomber to be a static display and they are restoring it to flying condition. Repairing a plane that was shot down, crashed and laid frozen for 50 years is no easy task, but work is expected to reach completion in 2018. This video takes a guided tour through the Hampden Bomber, its history, and the steps being taken to restore it to flying condition.