Someone Ought To Tell Him When They’re Launching Missiles 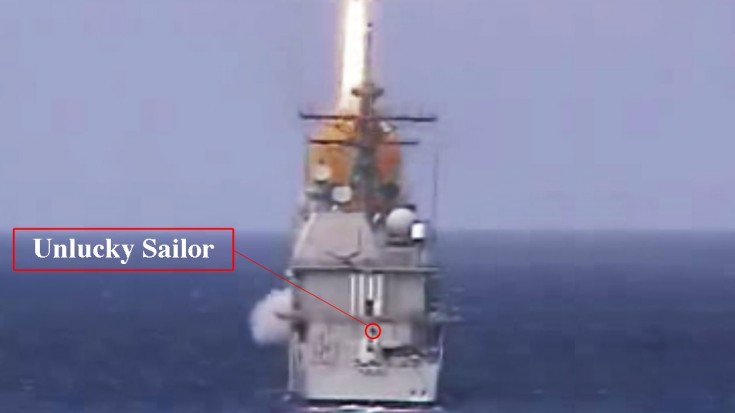 This is an oldie but a goodie. Filmed all the way back in 2007, this video still showcases how important paying attention is to every little rule during your training. It might just save your life.

Everyone needs a break from working hard all day, but for this sailor timing was simply not right (although one can argue it was exactly right.) Either not realizing or forgetting that his cruiser was about to launch its rockets, he stepped out onto the deck.

Although we do not know what the confusion was, we did some digging on the internet and found out the sailor in question ran back inside and was 100% O.K.  Judging by the video, that’s pretty lucky as stepping out slightly later would have literally blown him away.

This footage was filmed by Chief Signalmen of USS Shiloh who wanted to capture the rockets firing but got more than he bargained for.

The USS Shiloh that this footage was taken from is a Ticonderoga-class guided missile cruiser designed in the late 80s. Commissioned in 1992, this still active cruiser is stationed in Yokosuka, Japan.

During its career it has been involved in Operation Desert Strike, Operation Iraqi Freedom as well in assisting after the Indonesian tsunami in 2004.