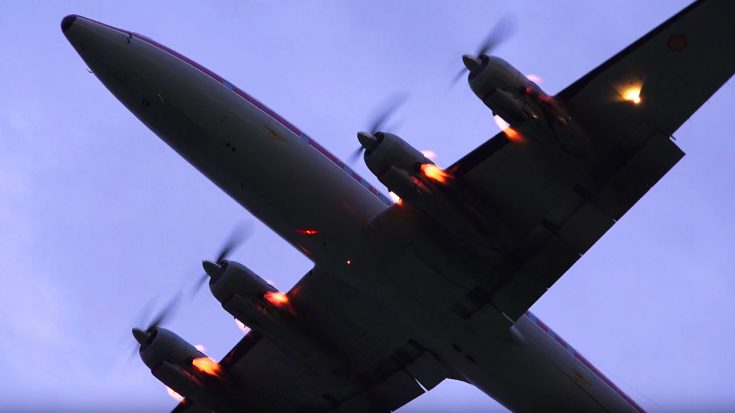 Here’s something you don’t see every day. Lockheed’s L-1049 Super Constellations aren’t exactly just laying around this day and age, so catching a glimpse of one taking off is pretty cool. Not to mention the flames spouting from its four radials.

We’ve got to admit. We didn’t know these planes were known for making this fiery show. We knew a bit about them and that they were designed soon after World War II ,but the flaming radials? Nope. No idea.

This awesome takeoff was captured at a practice session before the Wings Over Illawarra Airshow in 2016.

We did a little searching to find out why this plane was designed this way. Here’s what we found.

As Lockheed was looking to make a larger version of their previous transport planes, they made two feasible designs but ran into a problem. There weren’t any engines that could get them off the ground.

Then, in 1953, Pratt & Whitney released their R-3350 turbo-compound engines to the civilian market which also used PRT, or, Power Recovery Turbines. This system increased the horsepower of the engines enough to propel the Super Constellation, but one drawback was their flaming exhaust.

To make it safer to fly, Lockheed put armor plating where the exhaust flames exited and solved the problem in the simplest of ways. After that, almost 600 of them were built both for military and civilian use.