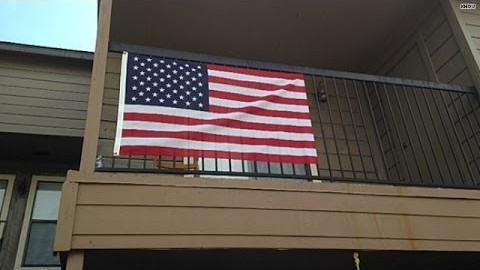 This isn’t exactly news as the incident transpired almost two years ago. We just stumbled upon this story now however, and figured that if we didn’t hear about it because it was only on the local news, you might have missed it too.

Our headline isn’t a hoax or clickbait or anything of the sort. It would of course seem that way because it’s too hard to believe. When we read the story we immediately researched it and found the actual news clip and were shocked to see that it did indeed happen.

“What really stunned me is that she said it’s a threat towards the Muslim community…I’m not a threat toward anybody.”-Resident ordered to take his flag down

Duy Tran moved to a Houston apartment complex of all places. When we think of Texas we think of steaks, guns, beers and red, white and blue. Please correct us if we’re wrong.

When Duy moved into his new place, he promptly hung his American flag over the balcony, explaining he had friends who died for his country and wanted to honor them. He got to enjoy it briefly as he got a call from the general manager of the building telling him to take it down.

The reason for this was, and we quote, “it’s a threat to the Muslim community.” Now, we don’t want to stir up a religious conversations, so please leave those comments out.

What we’d want from you is discuss whether or not a management property has the right to do this. Check out this short clip that’ll explain exactly what the manager did and give us your thoughts below.