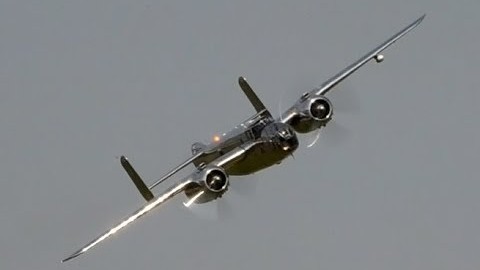 Aerobatic Show With The B-25 Mitchell On Loudly Low Passes

The North American B-25 Mitchell was crucial to the fighting effort of the Allied forces during World War 2. It further rose to fame when these medium bombers became the aircraft of choice of the “Doolittle Raiders.” Because the pilot and co-pilot were seated in a raised location, it allowed them good vision to the sides, front and above.

The “C” variety had several innovative features such as autopiloting system and underwing hardpoints. But it doesn’t end there because there was an additional provision for carrying torpedoes. In this particular video, however, the B-25 Mitchell used was built in 1945 in Kansas City and is part of the Flying Bulls fleet.  When she joined the “Kansas Warbirds” after being bought by several owners, she was named as the “Fairfax Ghost.”