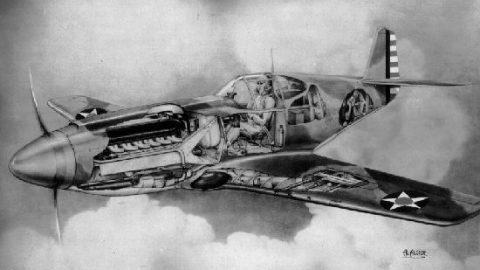 The P-51 Mustang was the consummate American aircraft believed to be the best fighter of the Second World War. It entered the fray in 1943 and overwhelmed the Axis Forces with its 2,080-mile range and its unmatched ground game, earning itself the distinction as the war’s finest long-range fighter.

America was initially slow in picking up on the indispensable importance of achieving aerial supremacy. Until the late 1930s, its air force was operating mediocre low-powered biplanes that would be easily decimated by Germany’s new generation steel aircraft. The Curtiss P-40 and the Republic P-43 proved to be underwhelming. Hence, the need for a new fighter craft.

By the time of its introduction, it was already too clear that full fighter escorts are indispensable in protecting heavy bombers in order to sustain a bombardment campaign against Germany. When the Normandy invasions rolled around in June 1944, the Mustang and the Thunderbolt decisively proved themselves as crucial parts of the Allied offensive by hovering their menacing presence throughout the breadth of the invasion beaches, as evidenced by the Allied air superiority of  30:1.

The Mustang had long earned its place in the pantheon of military aircraft, but only a few know that the outdated doctrine and the USAAF top brass’ archaic beliefs, stuck in stagnancy during the interwar years, almost derailed the conception of the P-51 Mustang.

Here’s how the Mustang story almost became the biggest mistake of the USAAF.

1. Until 1943, the High Command still believed that Escort Fighters should necessarily be as big and as expensive as the Big Bombers they would protect.

The planning of the enormous B-36 bomber reinforced this misconception. During this stage, it was actually suggested that a fighter as equally big as the B-36 be also built.

In 1943,  the Eight Air Force introduced YB-40, a B-17 Heavy Bomber that was modified into a destroyer escort plane: The experiment failed miserably because it was too heavy and too slow, a drawback that can be traced to the insane amount of ammunition it carried which was nearly triple the amount fitted on the more reliable B-17F.

2. The Air Corps almost dismissed the idea of producing the P-51 Mustang.

The American firm North American originally designed the Mustang for the RAF to replace the underperforming Curtiss P-40’s among its fleet.

Meanwhile, the USAAF’s military aviation policies prioritized the further development of the P-38 and the P-47.

What factor eventually turned their interest towards the Mustang’s production?

In 1942, the RAF needed ground support for the Army Cooperation Command. The Mustang immediately impressed the British and American command and drew lofty comparisons with the Supermarine Spitfire.

Soon afterward, Maj. Gen. Arnold confirmed that the British had placed orders for the production of more than 2,000 Mustangs.

3. Arnold admitted that it was the USAAF’s loss that it did not employ the superior P-51 Mustang earlier in the war.

The plans for the Mustang P-41 started in 1940 – three years before it became operational. This single-engine, low-wing fighter was lighter than the P-38, and the P-51H variant recorded a 1,800-mile maximum range and a top speed of 490 miles per hour.

11 March 1944 – At graduation of class 44-W-2, an optimistic General Henry Arnold, Army Air Corps Chief, says #WASP “May Take Place of All
Men Pilots” for duration of #WW2.
Optimism is about to be destroyed.
@officialNWHP @WomenInAviation @WomenMilAv8rs @Women_Aviation1 pic.twitter.com/LPrA8YbCfy