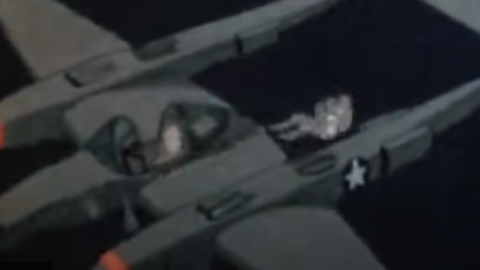 Back In The Day, They Showed You This And Wished You Good Luck

This short clip demonstrates what P-38 Lightning pilots should do in case they were hit and needed to bail out. Apparently, experts back in the day concluded that bailing out of a Lightning was impossible, as their twin booms and the horizontal stabilizer would get in the way. This video was made to show new pilots that it’s actually no different than bailing out any other plane.

Actually however, the object isn’t to bail out of your ship, but to make the other fellow bail out of his.-Narrator

As illustrated, pilots had two options when trying to exit their plane when hit. They could turn the plane on its back and drop out. If not possible, exiting through the left side of the canopy and sliding off the wing was recommended. The narrator does point out that one should not stand up on the wing and jump, as you’d probably be cut in half by the stabilizer. When sliding however, you’d be safe as the booms and stabilizer were situated higher than the wings. While sliding, the airflow would carry you straight under it and out of harms way. Unless of course, you’re over enemy territory and your troubles were just beginning.