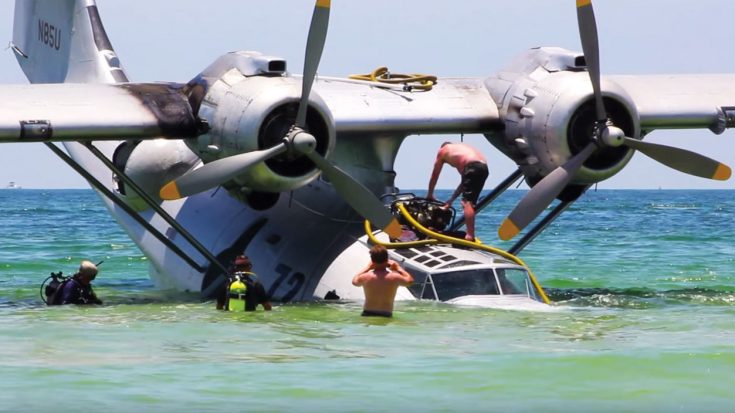 The movie USS Indianapolis: Men of Courage came out last Friday. We were waiting for it for over a year now, as we showed you a trailer of it back then. Although it starred Nicolas Cage (you know what we mean), the trailer looked decent enough for us to get excited about it. We were disappointed to say the least with the final outcome and then we heard about this incident which made it hundreds of times worse.

The movie was basically a flop. Between historical inaccuracies (which we and you, our readers, seem to be sticklers for), mediocre acting and cheesy special effects, this movie almost makes the “unwatchable” list. Another colossal mistake that was made during the movie was trying to make the movie more authentic by using a real PBY Catalina.

This is the type of plane that actually rescued the sailors in real life some 70 years ago. Although the shot was pretty decent in the movie, someone forgot to close the hatch. She was left overnight on the coast of Florida during high surf.

By the next day, her cockpit was filled with water and sand. As you’ll see in this video made by a Florida resident who also seemed upset, the film crew was trying to pump out the water and salvage the plane. At that point though, it dug into a sandbar.

What the video doesn’t show you is that they called in a barge with a crane to pull it out. When they tried, the whole fuselage crumpled up and then broke in half. See the above picture for proof.

Before this crappy movie was made the world had 20 airworthy Catalinas. Now we have 19. Thanks Hollywood.

Watch Next: This Is The “Great” Movie It Was Wasted For