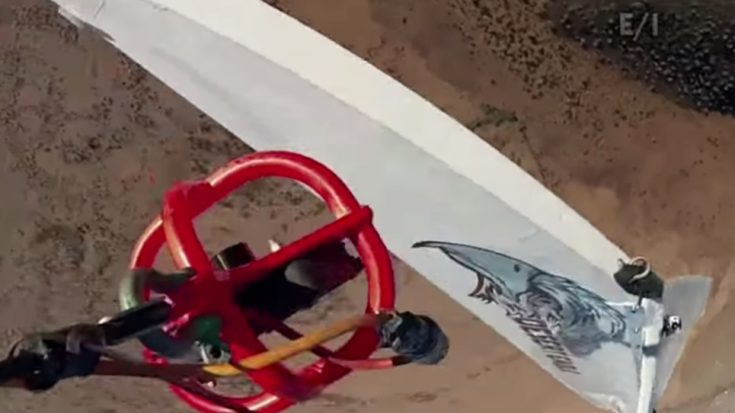 Will paper airplanes ever not be cool? This one certainly is. Arturo’s Desert Eagle is the largest paper airplane ever made. It’s 45 feet long, has a wingspan of 24 feet, and weighs 800 lbs. Though it would be extra incredible if we could say that then-12 year old Arturo built it on his own, he did have a little bit of help.

Arturo Valdenegro’s much smaller paper plane was selected to be recreated by a team of engineers when he won a contest at the Pima Air & Space Museum in Tuscon, Arizona. His plane flew the farthest.

The little contest grew into something big. Not only did Arturo get to name the giant paper plane; he also got to help build it.

First they made a 15 ft test model. Let loose by a helicopter, the tester didn’t fare so well, simply dropping to the ground. But such is the art of innovation. With a few adjustments and mishaps along the way, the team was finally ready to fly the 45 ft paper monster.

We should also mention that the team of engineers was led by aerospace engineer Art Thompson, who had a part in designing the B-2 stealth bomber.

It Flew For 6 Seconds

Perhaps our paper plane engineering has some room for improvement as the experimental flight didn’t last quite as long as everyone hoped for (about 6 seconds), but it was certainly exciting to give it a shot.

The original video was viewed over 1 million times and the museum got over 123 million media impressions in at least 12 countries. Also, countless young children were inspired, which is what it was really all about to begin with.

Pretty cool , Pima. Now that’s how you hook the future generations on aviation.

See the video all about it below.