The Ultimate Conspiracy Theory: Did Hitler Die In His Study Or Was It A Ploy To Help Him Escape? 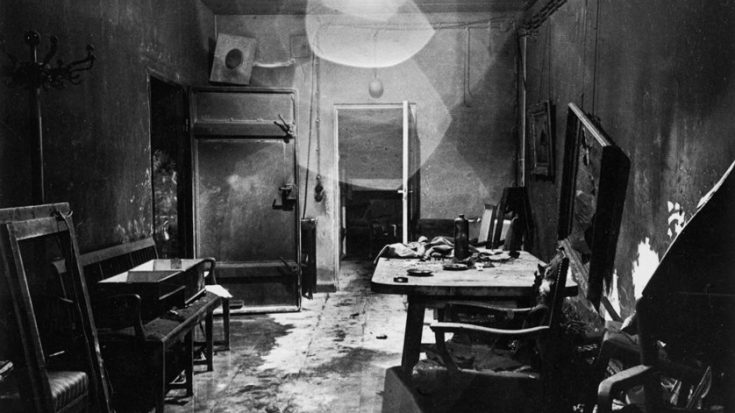 If you’re a big fan of conspiracy theories, then you might find this VERY interesting.

We all know how Adolf Hitler, dictator and leader of the Nazi Party, died. After wreaking havoc and causing violence and destruction on a global scale, his death was something that was both confusing and unbelievable to some. It was around 2:30 PM on April 30, 1945 when Hitler along with his wife Eva went to his personal study. An hour later, several witnesses attested to hearing a loud gun shot. His valet, Heinz Linge, went inside and smelled burnt almonds. SS-Sturmbannführer Otto Günsche also entered the room and there he saw the dead bodies of both Adolf and Eva. She died of cyanide poisoning while Hitler fired his own gun to his head.

It may sound like a straightforward cause of death. Later however, the Soviets believed he didn’t die and he was in fact, just hiding and preventing capture. A series of events and coincidences led most people to fear that he has just mysteriously disappeared.

So what is the real story behind it? Is it even remotely possible that Adolf Hitler survived and escaped the Western authorities and his consequent punishment? Did he really disguise himself and went on to live a peaceful life after he caused the deaths of millions of civilians and military men?

All the Allied forces needed was to see his dead body as a confirmation of his death. They merely wanted a solid proof. It was simple, really. If the man died, where was his body then?

There are so many things that supported the theory that Hitler survived. For one, it isn’t the first time he cheated death. Once, there was an attempt to assassinate him in his heavily guarded Wolf’s Lair headquarters. Basically, very few people know his exact location which made it possible that he wasn’t actually in his bunker on April 30. Two, Reich Leader Heinrich Himmler disguised himself in a sergeant’s uniform while waiting to make his final move. Therefore, it’s not entirely impossible that Hitler would do the same thing.

What’s also surprising is the fact that after Hitler’s bunker sent out a message that he shot himself, a German radio broadcast reported that he died fighting with his troops. Besides, many Germans who saw the dead body denied that it was Hitler or at least, it didn’t look like him.

But what really ignited the whole conspiracy theory was the Soviets who pieced every little, seemingly-insignificant part of the puzzle not just in search for the truth but also for propaganda since Stalin deliberately tried to misinform and confuse the Allies. First off, a translator from a team of Soviets whose sole mission was to find the dictator claimed to have overheard one military say, “Oh that one looks really like Hitler. He is Hitler!” Second, they noticed that the dead body presented to them had darned socks on which made it impossible for the feared leader to wear. Third, when they went to Hitler’s bunker, they saw a crater filled with earth which contained the bodies of a man and woman. Although the faces were burnt beyond recognition, they still took them to the Buch lunatic asylum for possible identification. Even after the autopsy was done, the only possible means of identifying the bodies were using the teeth. So they searched for Hitler’s dentists and with the help of their hand-drawn photos, found out that the drawing matched the teeth they were examining.

Though there were only assumptions but not enough evidence, Stalin still told President Harry Truman that Hitler was alive and residing in Argentina. Of course to prevent anyone saying otherwise, he made it into a state secret wherein the punishment is imprisonment.

In addition, Stalin’s deputy during WW2 Marshal Georgy Zhukov who previously said that Hitler was dead held a second press conference and announced that there’s no evidence supporting the initial claims. Because the runway was open, his escape would be easy and at the time, he could already be somewhere in Spain or Argentina. The press didn’t help with the confusion, they only added to it.

In the summer of 1945, the Soviets claimed that British fascists were hiding Hitler. In response, the British Military Intelligence sent Hugh Trevor Roper to investigate. The thing is, he was already too late because the bunker had already been ransacked and destroyed. Plus, the key witnesses were imprisoned and he had to rely on Hitler’s primary chauffeur Erich Kempka who said that Hitler shot himself. Although this became the official British version, Roper still found it confusing why there were neither blood stains nor bullet holes in the study.

On September 1945, the FBI began their own investigation. FBI Director J. Edgar Hoover, who was often described as paranoid, started receiving numerous tip-offs from people all over the US. They all claimed they saw Hitler – some at a subway stop while others said they spotted him in New York. Take note that while this is happening, the Soviets were already neglecting the remains they found in the crate.

In an attempt to provide proof that Hitler escaped instead of shooting himself in the head, the Operation Myth was organized. This was supposed to be used to validate Stalin’s claims. The whole idea was that a double died while Hitler and his wife Eva escaped to Norway and then went aboard a U-boat en route to Latin America. This actually makes sense because there were around 300 war criminals who sought shelter in Argentina so the dictator isn’t the first Nazi to do so. Also, the FBI received a report that a certain U-977 arrived on the coast of Argentina on August 17, 1945.

Witnesses claimed they saw the U-boat landings (which the Argentina Navy tried to capture but failed because of the huge coastline) that unloaded crates filled with documents and gold. Some even said they recognized Hitler sans his mustache. To further investigate who and what was in the U-boat, the FBI set up a covert operation inside the US Embassy in Buenos Aires.

Like the phone call tip-offs, there was a wide variety of claims. First, Hitler went from the Southern Andes to a German-owned hotel located in Cordoba. But the FBI received a more reliable report six months after World War 2 ended. Apparently, Hitler was staying in La Falda, at the Eden Hotel owned by Ida Eichhorn who they found had close links to the German Reich. She even sent a hefty amount which was to be used “at Goebbel’s disposal.” She was also a close friend and confidante of Hitler.

17-year old Catalina Gameria who worked as a maid at the said hotel vividly remembered seeing photos of Hitler all over the place. In 1948, she also admitted to have served him food at the third floor when he came for a visit. He shaved off his mustache and even wore a wig. Two weeks later, she accompanied the owner Ida to a wooden house deep in the mountains. They brought food to the place where Hitler stayed. According to her when she heard them talking on the phone, he went to La Rioja before he completely vanished.

In the mid-1970s, the US Intelligence finally admitted that there was no solid indication that Hitler was in any of the places mentioned above. And on April 1970, KGB flushed Hitler’s corpse into a river. Myth still has it that Hitler’s exact burial spot is located in Patagonia, Argentina. But whether that one is true or not, perhaps we’ll never know.