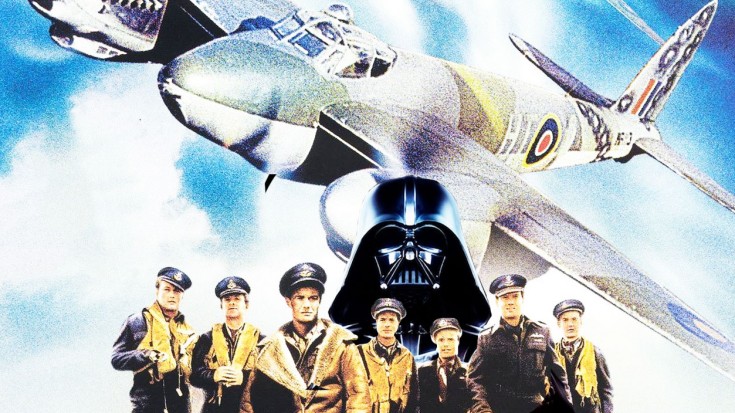 The 633 Squadron was released on June 4, 1964 in London. It’s a film based on the exploits of a WW2 fictional fighter-bomber squadron from Britain. The plot came from the novel by Frederick E. Smith which was also inspired by actual operations by the Royal Air Force.

The film features eight De Havilland Mosquitos, a superlative aircraft nicknamed the “Wooden Wonder” by wartime crew due to its innovative structure, remarkable versatility and unprecedented levels of performance. As the Royal Air Force had recently retired the type in 1963, civilian operators leased mostly former converted bomber examples (TT Mk 35) to the RAF for target-towing.

Death Star, on the other hand, was the galactic super-weapon in George Lucas’ famous movie franchise Star Wars. This fictional spacecraft was so powerful that it can destroy an entire planet.

The original Death Star’s completed form appears in Star Wars. Commanded by Grand Moff Tarkin (Peter Cushing), it is the Galactic Empire’s “ultimate weapon”, a huge spherical space station over 100 kilometers in diameter capable of destroying a planet with one shot of its superlaser.

This is all kinds of awesome and it does seem like Mr. Lucas became inspired with the idea from the 633 Squadron movie. Gotta give props to the video owner. He did a brilliant job editing this!