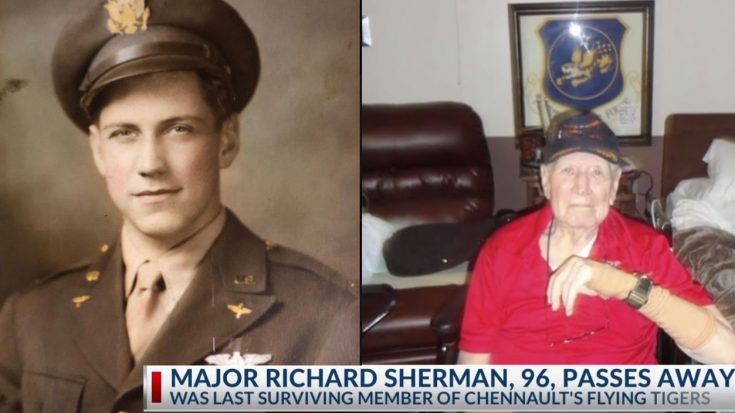 On January 9th, 2019, Major Richard Sherman passed away at the age of 96 at a Veterans home in Monroe, La. Sherman was the last living member of the First American Volunteer Group (AVG) commonly called the Flying Tigers. During World War II, he was under the command of Maj. Gen. Claire Chennault, the very man who started the Tigers.

Sherman wasn’t a P-40 Warhawk pilot which is what Tigers are typically associated with. He was part of the 11th Bomb Squadron of the Army’s 14th Air Force which was also commanded by Chennault. A bombardier and navigator, he flew 52 missions in a  B-25 Mitchell throughout the war.

Major Richard Sherman, the last surviving member of the Flying Tigers, passes away at age 96. pic.twitter.com/IRMpclsoIf

He also received a purple heart as he was shot when his squadron was intercepted by enemy fighters in 1944. After Sherman’s passing, Maj. Gen. Stephen Whiting, 14th Air Force Commander and Deputy Joint Force Space Component Commander said, ” Maj. Sherman and the original Flying Tigers are an inspiration to today’s military personnel. We remain indebted to Maj. Sherman and the greatest generation for their selfless service and sacrifices.”

The Flying Tigers were an all-volunteer group of pilots and crew who joined the fight to help the Chinese fight against Japan. Through presidential authority (at the direction of Chennault) these men were absorbed into the Chinese Air Force until they went back to their dedicated military branches in 1942 when the United States officially joined the war.

The group consisted of three fighter squadrons all using P-40 Warhawks totaling about 200, and 66 light bombers which Sherman was a part of. May you rest in peace and we thank you for your service.

You can see how the news covered this sad story below.