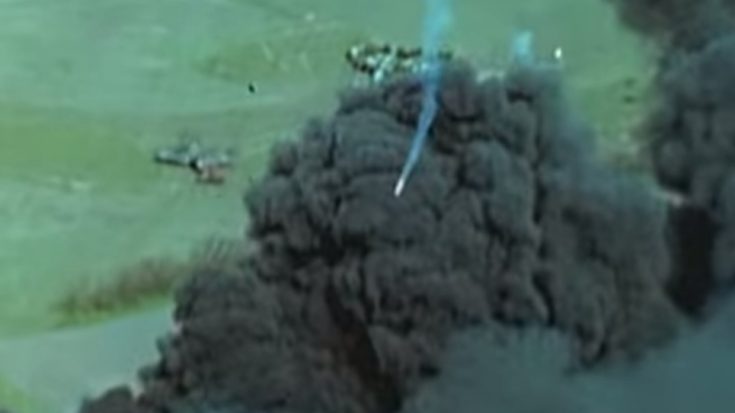 Here’s some wild colorized footage of a Republic P-47 Thunderbolt giving heck to the German Eggebek Aerodrome.  The video shows multiple strafings from April 13, 1945 and wow, it gets crazy.

We see quite a bit of flashes, smoke, and action in just the first few seconds. Though the footage is without sound, we definitely get the idea. Some German planes won’t be making it into the air any time soon.

And the Thunderbolt gets pretty low too. You can see a lot of details like the markings on the hit plane at :11, the horses galloping away from the fire at 1:25, and just the sheer impact of the firepower.

The Thunderbolt responsible is Darling Dottie, piloted by Captain Walter L. Flagg from Rhode Island. He was a member of the 63rd Fighter Squadron, 56th Fighter Group, 8th Air Force. On this day, he was credited for destroying two aircraft and damaging a third. Flagg would go on to earn the Distinguished Flying Cross, the Air Medal, Purple Heart, and a Distinguished Unit Citation.

The 56th Fighter Group, also known as Zemke’s Wolfpack,” is the stuff of legends, known for destroying 665.5 aircraft in air to air combat. They had more air to air kills than all other 8th Air Force fighter groups, and were the the top scoring Republic P-47 Thuderbolt group of WWII.  (Overall, they were second.)

Check out the short action packed clip below.