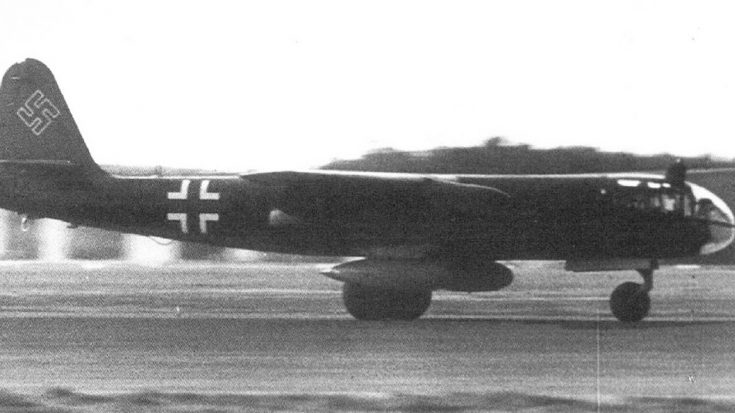 After seeing the Messerschmitt Me 262, Adolf Hitler envisioned this new jet as a bomber aircraft to destroy the Allied Forces. However, Luftwaffe General Adolf Galland objected to the Me 262 as a bomber and supported it in a fighter and interceptor role due to its great speed. The idea of a jet-powered bomber was still in the back of the mind of the Luftwaffe, it took some time but it would eventually grow into the Arado Ar 234 Blitz.

Originally designed as a reconnaissance aircraft, the Ar 234’s flying speeds of 459 MPH allowed it to easily outpace Allied piston fighters. It was so successful in this role, that it soon transitioned into a role as a bomber to quickly strike targets. After being converted to a bomber it was able to carry a payload of up to 3,300 pounds of bombs.

The Ar 234 didn’t see a whole lot of combat but these bombers were so advanced that none of them were ever shot down by Allied fighters during the war. Lack of resources towards the end of WWII meant that the German Luftwaffe couldn’t produce as many Ar 234s and they wanted, just a little over 200.

The Ar 234’s jet engine did more for the Allies after being captured than it did for the Germans. Only one Ar 234 remains in existence, currently in a static display at the Smithsonian Air and Space Museum.