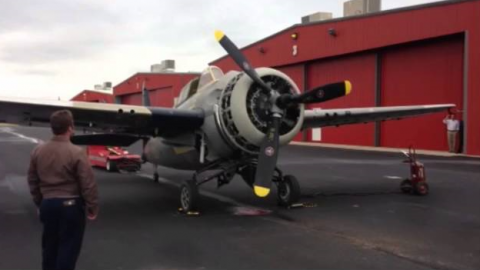 The Grumman Wildcat was an American carrier-based fighter introduced into the war in 1940. The particular Wildcat in this video however, was produced in mid-1945 and arrived at a San Diego Navy base too late to see any combat. Designated BuNo 86774, the Navy retired her the same year and it’s said that she served as a wind machine on movie sets in California. In 1957 she was acquired from the studio by Ed Maloney, a warbird enthusiast who restored her to display condition, as the studio scrapped her wings for ease of use. She remained there for a half a century. In 2009, she was purchased by Wild Warbirds, an independent specialist warbird restoration company, that got her back to airworthy condition by 2013.

The Coffman engine starter is commonly referred to as a ‘shotgun starter,’ and was equipped on some radial engines used in World War II.

One interesting fact to note is that this Wildcat uses a Coffman engine starter. Since the FM-2 Wildcats were designed to take off shorter carriers, every pound mattered. For this reason Grumman adopted using the cartridge system which was much lighter than the electric system used on their other aircraft. Conrad Huffstutler, the 25 year old warbird restorer, was able to track down a few original cartridges to start his Wildcat, but later found a manufacturer willing to produce these shells for him for future use.