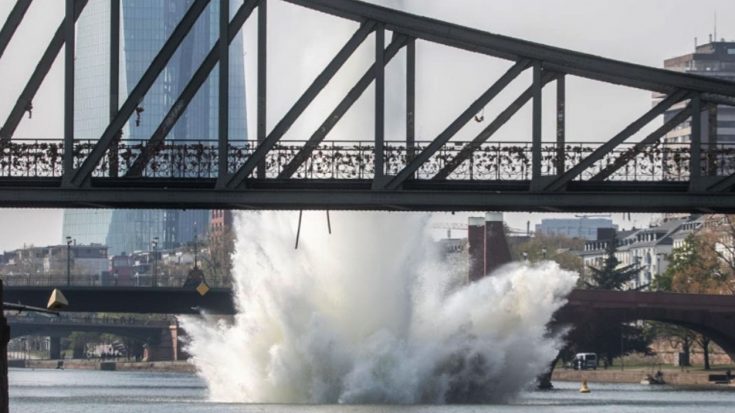 On April 14th, 2019, local authorities in Frankfurt, Germany, detonated a 550-pound bomb which was found in River Main days earlier. Controlled detonations like these are still quite common all around Germany as the constant bombing raids at the end of World War II left a lot of unexploded ordnance both in water and underground.

Please note: A WW2 bomb in the Main is to be defused tomorrow, Sunday, 14th! Around the area (see interactive map https://t.co/wI5M5cndf4) both river Banks will be locked until the operation is completed. For latest information follow @Polizei_Ffm and @feuerwehrffm! Please share. pic.twitter.com/K1jOXjIorE

The Mayor of Frankfurt  released the following statement, “I want to thank all the volunteers for their professionalism and their engagement — And all the residents who had to leave their apartments for their cooperation and patience,” as the team responsible for the detonation deemed it safer to have everyone leave in case things go awry.

The entire exercise went well as you’ll see in the video below. A special task force was sent to dive into the river to prime the threat for explosion and once everyone was at a safe distance, detonated the over seven-decade-old bomb. As you’ll hear, it was a very loud ordeal.

Frankfurt was a major target for American and British forces during the war. Between 1939 and 1945, bombers dropped nearly 28,000 tons of ordnance on the city, leveling many historical buildings as they tried to hit key strategic areas.

Bridges on the River Main were also targeted to cut off supply routes, the bomb found recently also being aimed at the bridge you can see in the historical picture above.