LIVE | Notre-Dame, Which Marked End Of WWII, Is Currently On Fire 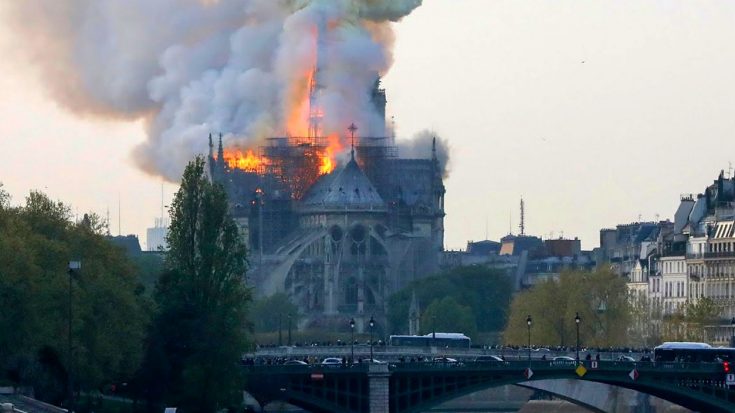 In the evening hours of April, 15th, 2019, Notre-Dame, the famous 12th-century cathedral in Paris, France, caught fire at about 6:00 p.m. local time. As tourists were trying to get into the building, the doors were abruptly shut as an alarm went off indicating a fire has broken out. Everyone who was already in the cathedral was immediately evacuated as well.

Only a short time later, smoke was seen coming from the top of the structure and once the spire caught fire, an inferno ensued. As the wooden structure became engulfed in flames as you can see in a resident’s Twitter post above, it toppled onto the wooden roof below, spreading the fire even further.

“It hurts to watch this. The cathedral is the symbol, the heart of Paris,” said one resident of Paris, as others stood and cried around him.

“We lose this, we lose Paris. It is apocalyptic. And this is the Holy Week,” another person added.

As of this writing, it’s unclear how the fire started although live reports are indicating the cathedral was in the middle of renovations.

As of this writing, firefighters are still trying to put the fire out.

The cornerstone of Notre Dame was laid in 1163. It was a monumental symbol of political, economic, and cultural power in France. Under construction for more than a century, the cathedral continued to be altered to fit the styles of the times.

It has endured endured many times – in 1548 the rioting Huguenots destroyed statues, the spire was damaged by wind in the 18th century, and it was badly plundered during the French revolution.

But the cathedral survived. The Hunchback of Notre Dame, the book by Victor Hugo, sparked interest in restoring it in the 1840s under King Philippe.

The cathedral has been intimate to the history of Paris for centuries, especially its bells. The coronation of kings, the visit of the pope, and the and the end of World War I and World War II have all been marked by the unique sound of the Notre Dame.