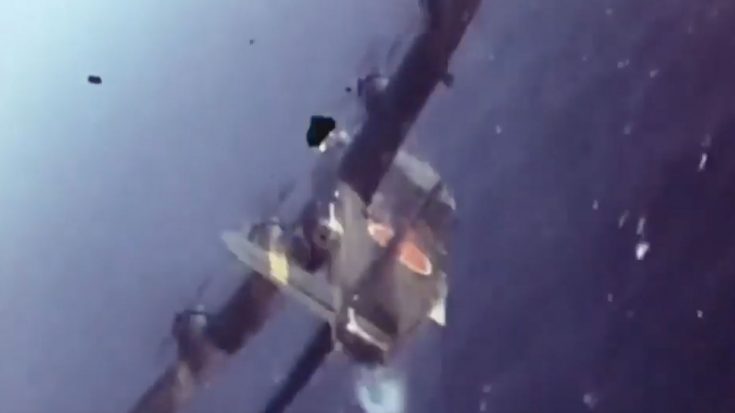 This short clip for an Allied fighter plane shooting down a Japanese Kawanishi H8K is actually a part of a full feature documentary film called The Fighting Lady. Released in 1944, the film follows the seemingly mundane lives of sailors aboard USS Yorktown (which was not explicitly stated in the film for security reasons at the time) as they travel from the shipyard to the South Pacific.

Once there, however, heavy fighting began. The crew took part in the attack on Marcus Island, then Truk and eventually in the Marianas Turkey Shoot.

As a side note, after watching the film himself, Gregory “Pappy Boyington told producers they got some of the footage of the prison camp he was held at. There’s also a shot of the pit in which he and other prisoners hid in while the Allies were bombing the island he was on.

USS Yorktown went on to earn to earn 12 battle stars during World War II and 5 during Vietnam. She is now a National Historic Landmark at the Patriots Point Naval & Maritime Museum in Charleston, N.J.