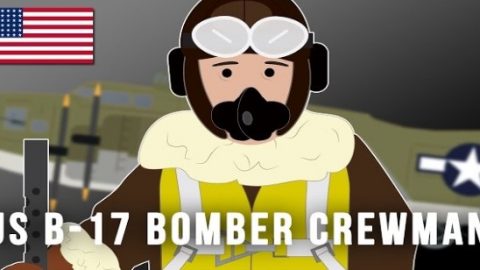 The B-17 was considered one of the most important bombers in WWII. Alone, it accounted for 1/3 of the total bombs deployed during the war. Its reputation as one of the best bombers didn’t come with its own setbacks.

One problem that warbirds had back then were unpressurized cabins. Crew members of the “Flying Fortress” needed to have oxygen tanks connected to their suits in order to breathe. They were also under the threat of frostbite, often wearing multiple sets of gloves to offset the cold temperatures.

Heralded as a “rugged” plane, the B-17 still had its shortcomings. Its somewhat thin plating opened the possibility of flak shrapnel penetrating inside and hitting crew members. Because of this, the planes usually survived missions but with minor losses of crew members.

At the start, B-17s usually flew at high altitudes. But with worsening weather conditions, H2X radar navigational equipment was fitted onto some B-17s. It improved precision during muddy weather and allowed them to climb higher altitudes. Therefore, the threat of Flaks was not as big compared to before.

Its lack of defensive armaments also became a problem, especially during bombing missions over Europe. Facing enemy fighter planes and anti-aircraft guns, it was hard for B-17 bombers to fly safely over cities like Berlin. The .50cal machine guns were no match for German planes with longer ranges.

Suffering heavy losses, the US Air Force decided to employ long-range fighter escorts such as the P-51 to help the bombers in their missions. The “staggered” box formations also proved helpful in maintaining focused fire and survivability.

Its reliance on daylight made them great daytime bombers. At night, however, they were hunted down by German planes as they couldn’t reliably target the planes with machine guns, or the enemy’s infrastructure with their bombs. Constant developments to the B-17 were being made during the war to improve its chances on the battlefield. Because of this, reportedly 95% of the German fuel industry was destroyed by the B-17s.

The existence of the ball turret on the belly was also a huge concern. Usually operated by the shortest and most physically fit crew member, these tiny death traps were dangerous to be in. If the plane had to perform a landing without its wheels, gunners inside would die if they couldn’t get out in time.

In very rare instances, B-17s experienced a shortage of equipment. Sometimes, a B-17 would lack one more parachute for the 10 crew members. Other times, the number of oxygen tanks was not enough for everyone on board.

A damning design error also contributed to around 400 crashes. These crashes usually happened on runways during landings. Before, these were attributed to pilot error. Succeeding investigations concluded that the control for the wing flaps and landing gears were positioned close together. Not only that, but they also looked similar to each other. This meant that tired pilots could have accidentally flipped the wrong switch during landing.

Because of this, redesigns were made in future planes and technology in general. The insistence that any form of technology should cater to human needs instead of the other way around made it easier for humans to interact with technology.

Even though it was far from perfect, the B-17 proved to be more than enough during the war. Thanks to the determination of the US Air Force, the B-17 was consistently getting updated. As a result, it became one of the most reliable and durable bombers of WWII.

The damage it could do to industrial infrastructure and its proven resiliency made it the preferred bomber by the Air Force. Being the most iconic bomber of the war, it became the symbol of the might of America.