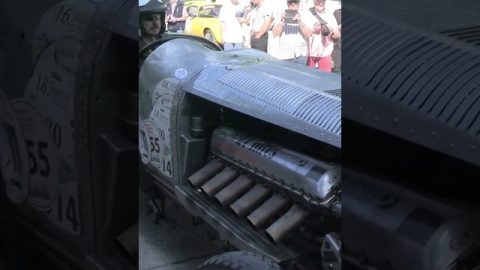 Many people often associate Rolls-Royce with luxury cars. However, the company also played a key role in aviation during WWI and WWII in Europe.

The Rolls-Royce Merlin is a 27-liter liquid-cooled V-configuration 12-piston engine that was first introduced in the 1930s.

At first, it had an evaporative cooling system that was too finicky for the air. It was only until the ethylene glycol liquid-cooling systems were introduced that where started to be more reliable. It then became one of the most successful aircraft engines in WWII.

The footage features the start-up of a 1000HP Spitfire-Engine Car which is powered by the Rolls-Royce Merlin V12 engine with 27 Liter of displacement. This was taken during the Oldtimer Grand Prix Brugg event in Switzerland. It’s certainly not an engine to be messed with!