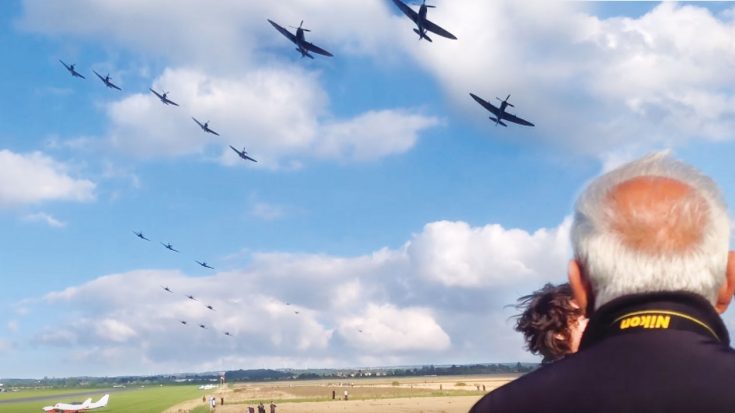 This absolutely fantastic video was taken at the Duxford Airshow last year. A youtube user by who calls himself “227beau” uploaded this stunning display to his account, and we have to admit, it’s one of the best Spitfire videos we’ve seen in a long time. According to his description, he used his Ipad to record it and it came out fantastic.

The reason this video and its content is so special is because when it was recorded  in 2015, England was celebrating its 75th anniversary of the Battle of Britain. It’s this reason that these 17 Merlins can sing to you in this video. The sound is absolutely incredible, not to mention the formation flying overall.

When we saw this video, we started thinking though. That sound of the engines made our skin crawl a bit just by watching the video, and we can’t even imagine what that felt like being there. Then another train of thought started making us ponder of what that must have sounded like during the war.

With Merlins and Griffons mounted on many British fighters and bombers, a raid or defensive deployment must have sounded just chilling. With Avro Lancasters for example sporting 4 of those, flying 50 of them along with even more escorts over Germany must have carried the sound of miles.

Just a thought though. Enjoy the video.