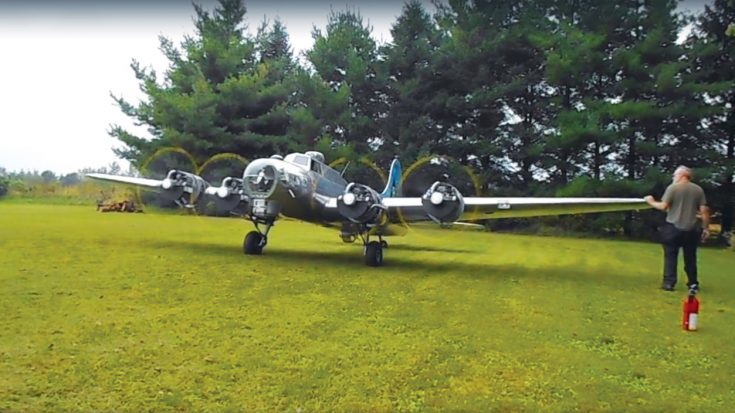 This Is Beyond Cool.

In case you missed the first couple articles we did on this 1/3rd scale B-17, let us fill you. The story is truly incredible.

Jack Bally was drinking a beer with his buddies in January of 1999, talking about what project to build next. We’ve all been there before. You start getting a little buzzed and maybe you decide to refurb your bike. Maybe restore a ’67 Mustang. If you’re a handy guy, you just pick whatever thing you’ve always dreamed of. Then, after sobering up, you actually think about whether or not you’re going to do it.

Jack is a man of a different caliber however. He actually went through with it, but not only that, he built something no one ever did before. A 1/3rd scale B-17 you can actually fly inside of.

We’ll be live streaming the takeoff sometime at the end of this year, so check back with us to make sure you see it!

It took him 17 years to get to this point and no, it’s not flying yet, but it’s getting really close. When we covered this story last year, he was just finishing her up and now she’s taxing around his field. We talked with Jack and he said that by the end of this year some lucky chap (slightly crazy too) will be taking off in this thing.

As a side note, the way he built this is from a 1/9th scale remote control model airplane plan. Yup, he just upscaled them  up and 17 years later, voila, it’s moving across his yard.