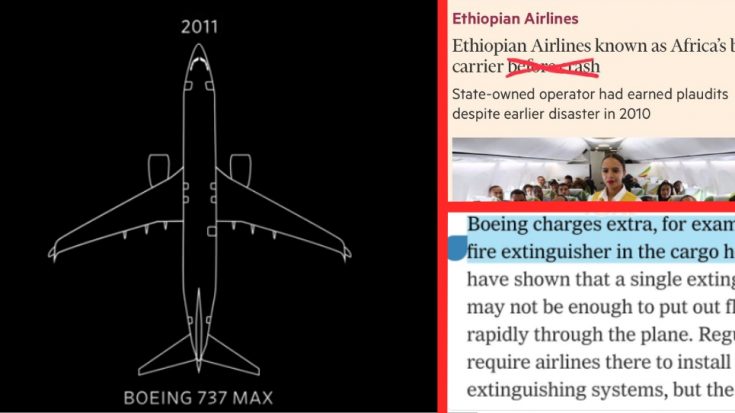 On March 10, 2019, news of the Ethiopian Airline crash that killed 157 people rocked the world. But it wasn’t just because it was a tragedy – the incident showed clear similarities to the Lion Air crash in Indonesia that happened just 5 months before. News quickly traveled that both crashes had happened in a Boeing 737 Max 8. The fact that both had crashed so soon after takeoff and had struggled to keep their noses from pointing down sparked major global discussion about Boeing’s new plane, pilot training, and air travel in general.

But with all the cover came some massive blunders. Here’s some of the most questionable information that was put out:

4. Was The Pilot Trained?

Ethiopian Airlines had some sharp criticisms for what they deemed false reporting by two American media outlets. According to them, the pilot had in fact completed all of the necessary training.

“We urge all concerned to refrain from making such uninformed, incorrect, irresponsible and misleading statements during the period of the accident investigation.” – Ethiopian Airlines Statement

If you drive a car, you’re probably aware that you can’t get very far without fuel. The same applies to planes, whether it’s a Boeing 777, a Boeing 737, or a Corsair. While this isn’t wrong, we’re not so sure it’s newsworthy.

2. Ethiopian Airlines Was Africa’s Best Carrier Before The Crash?

Fixed it for you. pic.twitter.com/wK5p2vQOv0

A Financial Times article implied that Ethiopian Airlines lost some faith after the March 10 crash. Despite the incident, however, the airline is still in good standing and holding onto its reputation as the best.

1. How About That Scary Video From Inside The Plane?

So What Do We Know Then?

The Ethiopian Airlines crash is still fresh off the press, so if you’re looking for hard facts, you’ll simply have to wait until the black boxes have been analyzed. Everything else is speculation at this point. However, here’s what has come out of this so far: