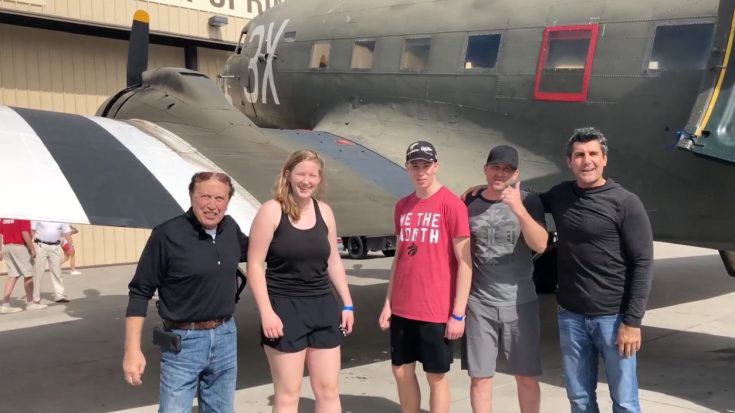 Until May 2019, the Palm Springs Air Museum in Palm Springs, California, will be cutting the price of their C-47 flight from $255 to $99. Named What’s Up Doc?, this airframe was actually built during World War II in 1944 and although it isn’t known if it flew in battle, it did serve in a few air forces after the war. The Royal Air Force, Belgian Air Force and French Air Force all used this aircraft, and she eventually ended up flying with the Israelis.

You can get more information and book your flight in the link below:

SPECIAL MARCH MADNESS: $99 per seat for all rides purchased through March 31, good for all flights scheduled through May 27, 2019 – allow one hour for check-in and flight*, some restrictions apply

The Palms Springs Air Museum acquired her in 2003, desert camo and all. They then repainted the whole airframe in D-Day livery (invasion stripes) and a local volunteer drew the original nose art on both sides of the nose, featuring Bugs Bunny saying his famous line, “What’s up, doc?”

The aircraft is the museum’s pride and joy but they also have one more aircraft you can take for a spin. The P-51D Mustang name Bunny can be flown for one whole hour too, but the price is a bit steeper. At $1,895 bucks it’s a bit more than the C-47, but hey, how many of us can say we’ve flown in a Mustang?

Book your flight in our C-47 for NOW ONLY $99! Yes this is a SALE! Usually $225 per seat but now only $99 for any of our C-47 flying days through May. But you must book your fight now before the end of March. It is a March Sale! https://palmspringsairmuseum.org/warbirdrides/Join us onboard our World War II Paratrooper C-47 "What's Up Doc?" for a historical flight experience! The aircraft that dropped paratroopers on D-Day at Normandy and life saving cargo in the Berlin Airlift. Get right up front with the pilots too! Visit https://palmspringsairmuseum.org/warbirdrides or call us at 760-778-6262 for more information. Thanks!

P.S. Here are some videos of what you’d be getting into so you can hype yourself up.