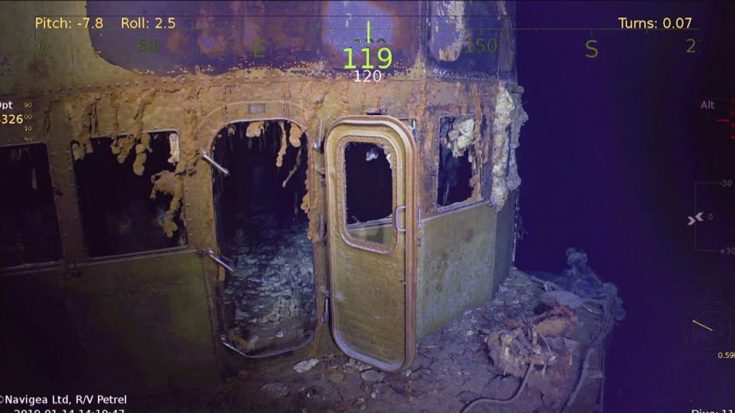 In early January 2019, R/V Petrel, a research vessel owned by the estate of Paul Allen (which is also responsible for finding various other historical wrecks), located USS Wasp 13,780 ft. below the surface of the Pacific. On March 12th, 2019, they released the pictures of their find on social media, pictures that have not been seen before.

First look at the USS Wasp (CV-7) discovered by our #RVPetrel.

Located nearly 4,200 meters below the surface of the Coral Sea, the aircraft carrier has been found after more than 76 years.

It's an honor to mark the final resting place for these brave sailors. pic.twitter.com/8lfEKYdm1s

USS Wasp (CV-7) was an aircraft carrier in the United States Navy which served during World War II. Built between 1936 and 1940, the ship was first deployed to the Atlantic to help with the occupation of Iceland but was sent over to the Pacific Theater just a year later to replace ships lost in major battles.

On September 15, 1942, while on the way to Guadalcanal to aid the insertion of Marines, the ship’s lookout saw 6 torpedoes coming toward the ship. The crew tried to avoid them but there were just too many, three striking the front of the ship near fuel tanks and ammunition compartments. In less than an hour, multiple explosions caused fires to burn with unbearable intensity, the captain ordered to abandon ship.

193 sailors lost their lives in the attack, 336 were wounded and nearly 2,000 survivors were rescued by other ships. The ship was torpedoed as not to leave sensitive information onboard and sank later that night.

Here are the pictures of USS Wasp taken by R/V Petrel.

You can also see historical footage of USS Wasp below. The film was taken shortly after the ship was torpedoed and caught fire.