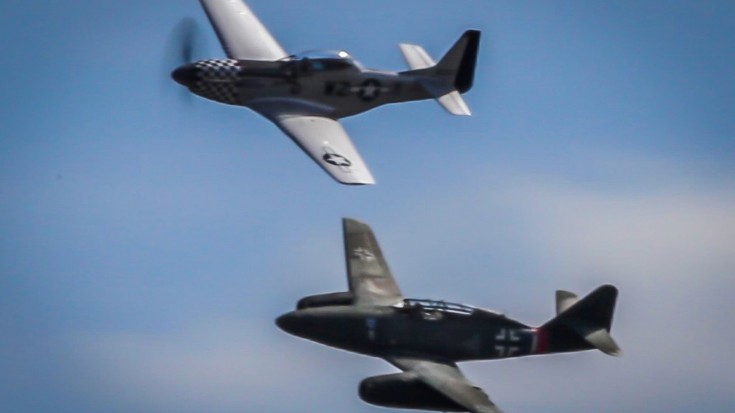 During The War, The Mustang Would Have Been In Trouble

The Messerschmitt Me 262 was the world’s first jet-powered aircraft, entering combat in April, 1944. The development of this new plane type began before the onset of the war, as German Nazis wanted to gain complete air superiority. Luckily for the Allies, the first prototypes were plagued with engine troubles and were not made fully operational until its first successful test flight in July 1942. In addition, Hitler stalled mass production of these jets as he wanted to used them as ground-attack and bomber aircraft, while his advisors were pushing it as an interceptor.

During their short and limited service, Me 262 pilots shot down 542 Allied aircraft, although some records show a much higher number.

Without a doubt, the Me 262s were an enormous threat to the Allies. With a top speed of 559 mph, these jets flew about 160 miles faster than the fastest Allied propeller plane. It was also armed with 4 30 mm Mk 108 cannons capable of dispersing 650 rounds per minute per gun. With that speed and weaponry, have the Me 262s been introduced to the war earlier, the outcome could have been much different.