Breathtaking View: F4U Corsair & AV-8B Harrier Side By Side 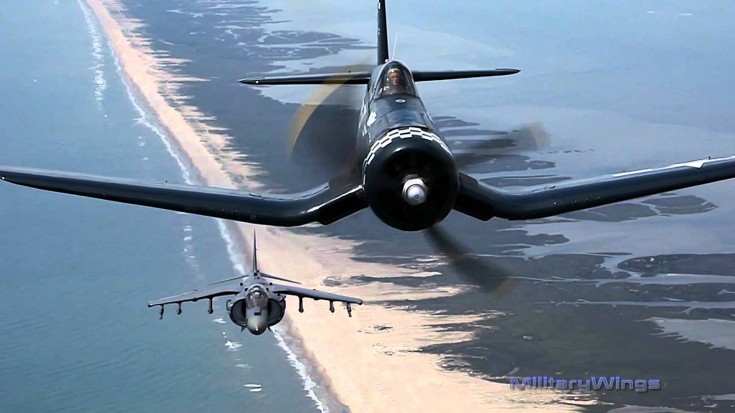 This Is Probably One Of The Coolest Views Of The Corsair Ever!

This great footage gives great perspective on how far aviation has come. Designed almost four decades apart, there is absolutely no comparing the capabilities of these two planes. This doesn’t mean that they are not beautiful to look at though, especially in that scenario. The Corsair in particular was one of the most iconic planes during its service in World War II, as her ‘bent wings’ gave her an unmistakable look. A strong fighter and bomber, the Corsairs were one of the strongest planes on the Allied side.

Here are some notable facts about these two warbirds:

The McDonnell Douglas AV-8B Harrier is a single-engined ground attack aircraft. The Harrier, which comes from what is informally called the Harrier Jump Jet Family, was specifically designed to be capable of vertical or short takeoffs. This allows for these jets to land in any sort of clearings, eliminating the use of airbases which are of course expensive. Although this ability hinders their speed, range and payload, it is still a great tactical advantage.