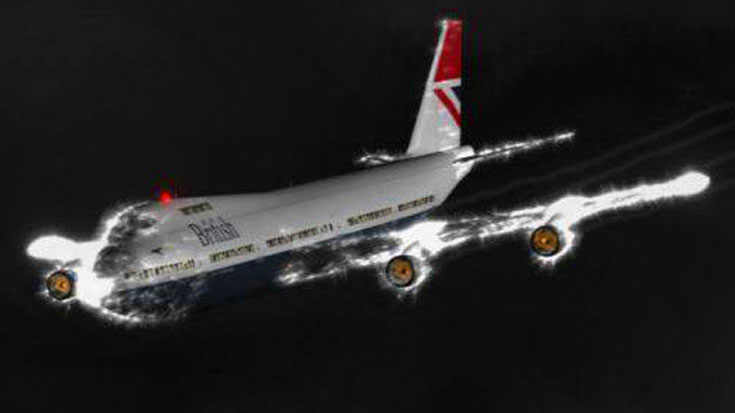 Airline travel is hardly anyone’s preferred form of aviation due to the stresses, hassles and of course the lousy leg room. Commercial aviation is safe but it does have some risks from time to time and skilled pilots know how to avoid those risks. It doesn’t occur very often but active volcanos can be quite problematic for flights and there was once a plane that survived an encounter with one.

No one likes a volcano, especially pilots because the smoke and debris create hazardous flying conditions. The inability to see, the possibility of materials sucked into engines and low air quality are nothing to joke at. In fact, some volcano plumes can be so big that flights over entire oceans must be diverted to avoid danger.

In June of 1982, British Airways flight 9 was making its way across the Indian Ocean towards Perth Australia. Things seemed fairly routine as the Boeing 747 traveled in the dead of night but then was suddenly stirred by the sight of sparks around the plane. The crew had never seen anything like this, one by one the engines began to lose power and the plane became engulfed in flames.

“Ladies and gentlemen, this is your captain speaking. We have a small problem. All four engines have stopped. We are doing our damnedest to get it under control. I trust you are not in too much distress.”

Unbeknownst to the crew, they had flown the 747 through the plume of an active volcano about 100 miles away. The volcanic ash was dry and unable to be detected by the plane’s weather radar which focuses on moisture. Fortunately, the crews were able to set the plane into a glide for a few minutes until the debris broke up and the engines started again.

Despite the horrifying ordeal, no lives were lost due to the actions of the pilots. The Smithsonian Channel recalls the incident in this clip with interviews with the heroic pilots.