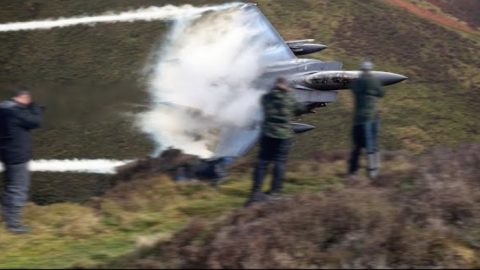 You owe it to yourself to see these planes up close. With how near and fast these planes are on the ground, spectators watching can feel the earth shake as it gets nearer. Photographing these warbirds are the dream for some people.

The F-15E’s sleek design is a crowd favorite during airshows. This multi-role strike fighter can reach speeds greater than Mach 2.5 – that is roughly 1,650 miles per hour!

Next to be seen is the CV-22 Osprey. Unlike the two planes featured in the video, this versatile aircraft takes off and lands vertically. Its primarily used in long-range infiltration, exfiltration, and resupply missions.

The last plane featured is the MC-130H. A plane as big as this lends itself the role of the military transport in combat. With a capacity to hold 77 troops and 57 paratroopers, be assured that this plane can provide backup when needed. It can also hold BLUE-82 and MOAB bombs if necessary.

If you haven’t seen these planes in person, then this video will give you a general idea of what to expect when the time comes.