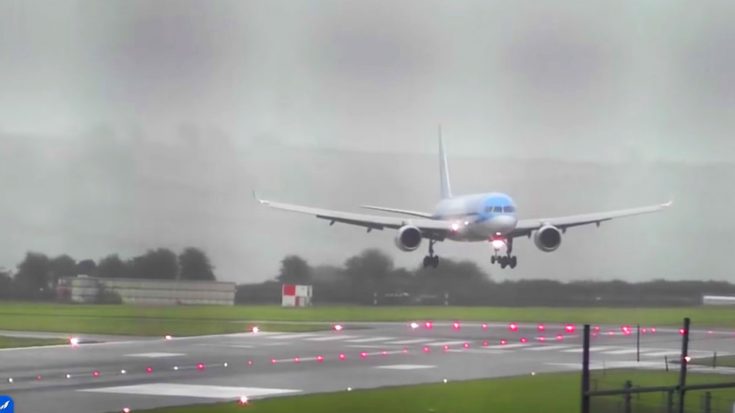 Britain just braved one of its worst storms in recent memory. Named Callum, the storm caused some of the worst flooding in Wales in the past three decades and as of this writing, took three lives as it tore through the mainland.

Winds of nearly 60 mph knocked out power of more than 2,000 homes and businesses and forced airports to shut down due to the treacherous winds. Many flights, however, weren’t able to be rerouted and had to land before the storm reached its peak.

One such flight was TUI Airways which reached Bristol Airport in the UK while winds were gusting up to 46 mph. Unable to divert to any other airport due to lack of fuel, the pilot had no choice but to land at the designated runway.

The tower listed the winds as coming in at 180 degrees which meant that they were coming directly across the runway. As is routine, the pilot had to face the nose of the plane into the headwind making it appear as if it was almost perpendicular to the runway. Once the rear wheels touched the tarmac, the pilot de-crabbed the aircraft making it quite a scary yet smooth landing considering the circumstances.