B-17 Ball Turret Firing Off Rounds 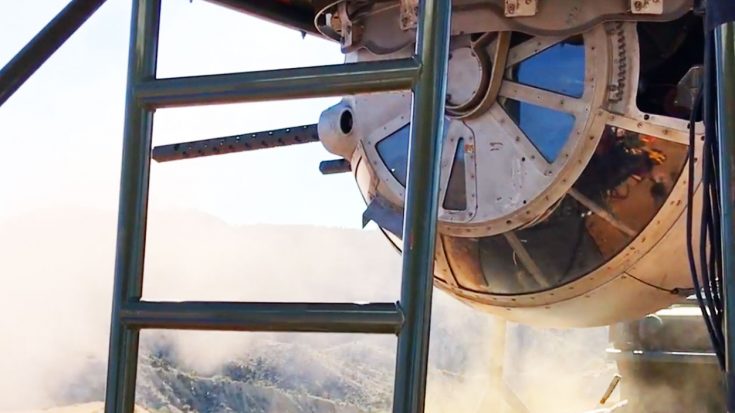 Uploaded on October 2oth, 2018, a video of a man firing a ball turret exploded all over the internet. As of this writing just two days later on October 22nd, the video has been viewed over 2.2 million times on  Facebook alone with 5,500 likes, and over 22,000 comments.

It’s simply a side shot of a ball turret mounted on a rig (with full rotation capabilities) firing the whole nine yards at a range. After doing a bit of research, it became apparent that the uploader signed up for one of the neatest World War II experiences in the United States, namely, Bomber Camp.

Located in Stockton, California, a man by the name of Taigh Ramey wanted to transform his passion for history and collecting World War II memorabilia into something for everyone to enjoy. In 2008, he made that a reality with Bomber Camp.

“Are you looking for a Call of Duty experience, but for real? Do you remember watching the movies Twelve O’clock High or Memphis Belle? Have you ever imagined what it would be like to fly your own mission in a legendary B-17 Flying Fortress or a B-24 Liberator? Young or old you can live your dream at Bomber Camp™!” | Bomber Camp

When you sign up, you get a “mission briefing” once you get to the premisses which prepares you for the day ahead. You then get a choice to fly in either a B-17 Flying Fortress or a B-24 Liberator and even get to shoot the 50 cal like you’ll see in the video below.

It’s definitely an experience of a lifetime.