B-2 Exposes Its Crafty Stealth Tech While Refueling 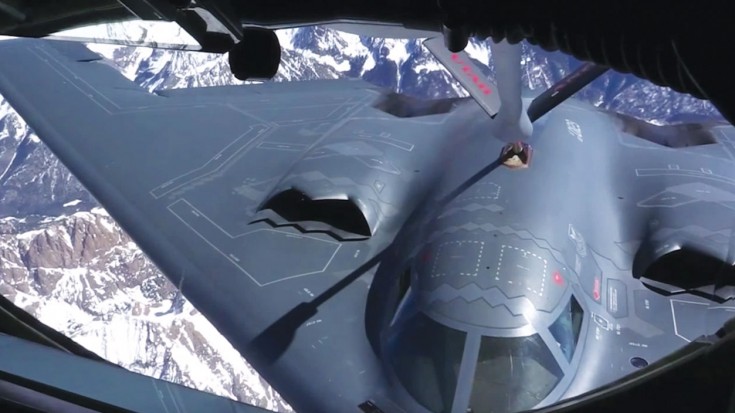 Ahhh, the good ol’ B-2 Spirit. Sweet and sleek design, a force multiplier and an undetectable nuclear warhead delivery system. What could be better?

This video, although seemingly ordinary,  is pretty fantastic from our point of view. For one, it’s just great that the Air Force’s PR takes such videos, as many of us would never be able to see what goes on behind the scenes.

Here, a B-2 was on a routine practice mission and needed to refuel. As always, a KC-135 was there to assist with its boom system and everything went as planed. The videographer caught some fantastic shots of the whole ordeal too. Nice, crisp closeups of the B-2, but one thing did catch our eye though.

Seemingly small, this actually blew our minds a little bit. We all know that the Spirit is a STEALTH bomber. Its shape is such that it can’t be picked up by radar, and the materials it’s built out of are able to blend into the sky so they can’t be visually identified. It’s all well and good, but other things such as intakes, antennas, and radar systems also had to be stealthily concealed. This also includes the fuel receptacle.

Notice how it turns around to take the fuel in. That’s pretty neat in itself, but notice what happens when the Sprit crew is done and it turns around again. This video was captured in 1080p, meaning that it’s super sharp and you can really see things clearly.

By that we mean that you can see the receptacle completely disappear! It’s not magic, it’s just pure stealth technology. Pretty awesome if you ask us.