B-25 “Miss Mitchell” Hot Bottle Start Up And Take-Off 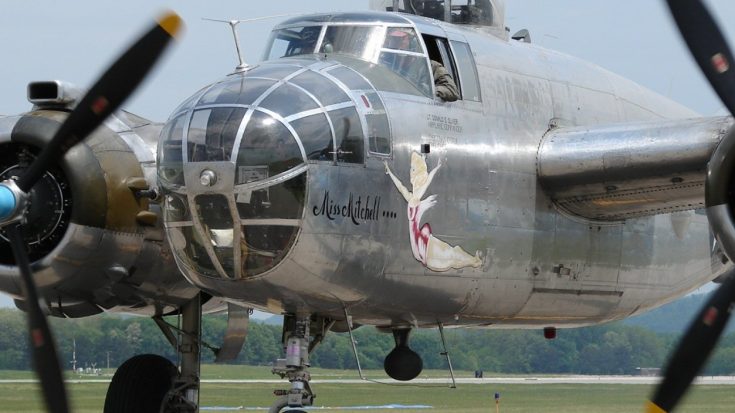 Wednesday, April 17 was a special day for B-25 lovers in Pierre, South Dakota. “Miss Mitchell” paid a visit to the community on a tour of South Dakota to commemorate the Doolittle Raid, in which the B-25 played an iconic role.

The weather may have delayed the planned 12:00 takeoff, but that just meant the B-25 got to stick around a little longer. When it did come time for her to go, the crew decided to do something special for the crowds.

They opted for a ‘hot bottle’ start – instead of cranking the engines over with a modern power unit, they turned the props by hand and then cranked them over in one massive explosion to ignite the engines.

The scene was reminiscent of the takeoffs aboard the USS Hornet on April 18, 1942, 77 years ago. The crew stood by, ready for any fire mishaps.

“Miss Mitchell” dips her nose for a moment, a gesture that shows the power of the 1,700 horsepower Wright Cyclone engines getting ready to show off. Their sound seems pretty similar to that of a Harley Davidson.

Then it’s off she goes! Unlike the doomed Mitchells of the Doolittle raid who mostly crash landed through no fault of their own or their pilots (forced to fly further with insufficient fuel), this beauty gets to enjoy her trip…and so do we!