B-26 Marauders Bombing Raid Over Germany Filmed In Color 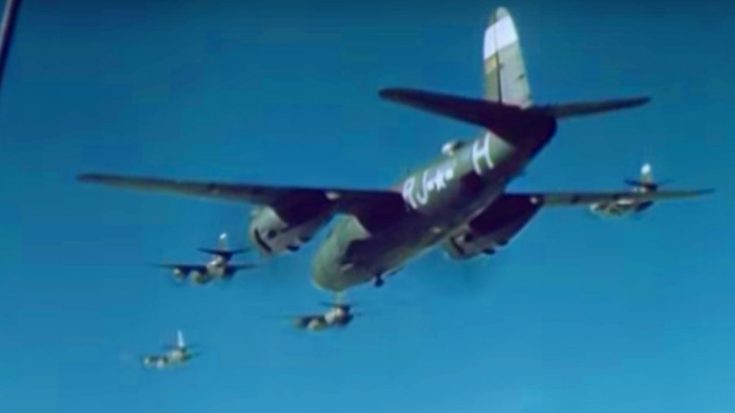 As the Allied Forces began their assault on Germany many bombing missions were undertaken to cripple military and supply targets. One of the most prominent bombers of the time was the Martin B-26 Marauder.

In the early years of WWII, the B-26 Marauder gained a reputation for accidents so it was given the title of Widowmaker. It had to fly and land at exact speeds otherwise it was prone to stall and crash. Aside from its shaky reputation this mid-sized bomber could fly at a maximum speed of 287 mph and carried an impressive 4,000 lbs of bombs.

“The Marauder’s high performance and revolutionary features made this a huge leap for most, and the high approach speed and unforgiving single engine operation were more than some “green” pilots could handle. Experienced mechanics were also in short supply, which may have contributed to the high incidence of engine failures early in the bomber’s career.”

Some called it Widowmaker, others called it The Flying Coffin and a wide assortment of names, but this bomber got the job done. In this rare historic footage, you can see a squadron of Marauders launching an assault on Germany. Captured in color you see these legendary bombers unleashing their massive bombs on military targets.