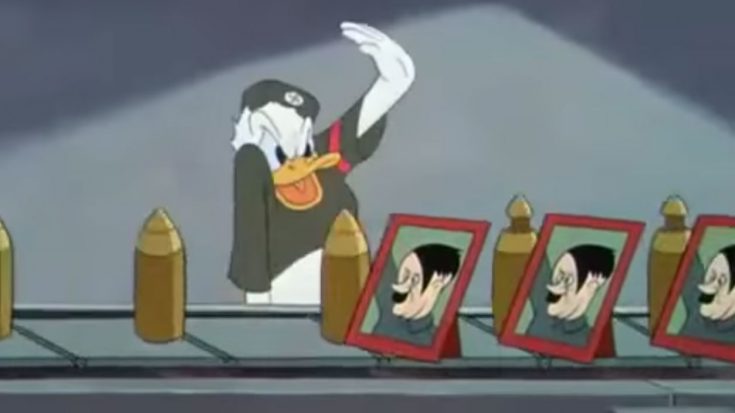 During World War II propaganda cartoons were common in all over America. They gave us a chance to laugh at the absurdities of war and poke fun at our enemies. Even weekly newspapers featured cartoons drawn by Dr. Suess spoofing the Axis Powers. Just about every movie was preceded by an anti-Nazi cartoon such as Private Snafu or The Ducktators from Warner Bros.

At the time Walt Disney Studios was producing training films for the United States Military, but they saw a great opportunity to return to their animation roots. In the end, Disney created a film that went down in history one of the greatest cartoons ever made, Der Fuehrer’s Face.

The cartoon depicts Donald Duck as a factory worker in Nazi Germany under constant torment. Originally titled Donald Duck in Nutzi Land, the theme song became such a huge hit that it influenced the studio’s decision to change the name. Audiences all over the country praised Der Fuehrer’s Face for its incredible humor and teardown of Nazism.

“They had a real seriousness of purpose — in some cases, propaganda; in some, morale-building; in some cases, very specific technical directions. And all of this had to be accomplished by a team of animators and story men and artists who were used to animating ducks and mice.”

Der Fuehrer’s Face went on to win the Academy Award for Best Animated Short Subject of 1943. After WWII the United States Government called for a ban on all propaganda cartoons and it was sent into the Disney Vault. It is a shame that such a brilliant cartoon was banned but now you have a chance to watch the hilarious masterpiece, Der Fuehrer’s Face.