Bayonet Goes Into Guard’s Foot At Tomb Of The Unknowns 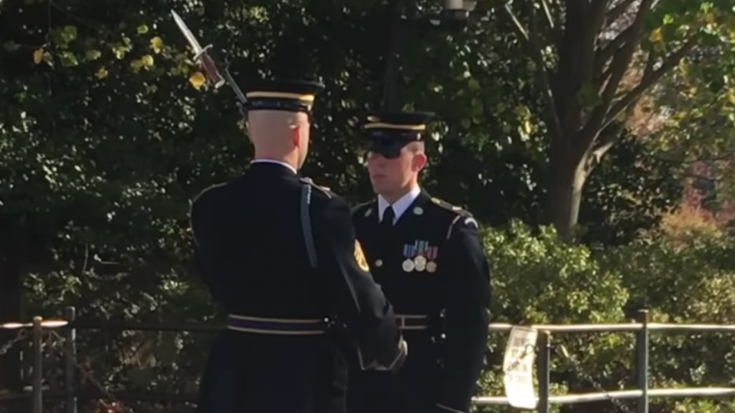 These Guys Are Extremely Disciplined.

The guards at the Tomb of the Unknowns at the Arlington National Cemetery are extremely well trained. Part of the United States Army, they spend countless months studying and practicing for this honor and only a few applicants actually make the cut. That’s how difficult it is to be accepted as an Honor Guard.

As you can imagine, their entire routine is practiced until it is flawless. That doesn’t mean, however, that these soldiers aren’t human.

We found only one video of an Honor Guard making a mistake, but even when it was made, the composure displayed by both soldiers was incredible.

The guard stepping down was performing the ceremonial inspection of his weapon in order to pass it on to the next guard and it slipped out of his hands. Now keep in mind. These guys are wearing soft, cotton gloves and are handing a highly polished M-14 with a wooden handle. It’s hard to think incidents like this don’t happen more often.

After it slips, the rifle went bayonet down right into the other guard’s foot. It happened in a split second before both of them recovered and you can clearly see the afflicted guard flinch.

Then, like he trained hundreds of times, he does his 2-hour duty and paces the mat without making any adjustments for his injured foot. We thought it wasn’t possible to have even more respect for these guys, but apparently, it is.