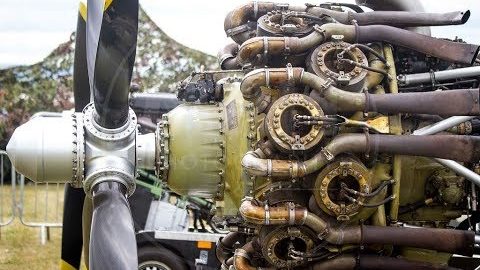 You Can Hear The Power

Imagine drinking your cup of coffee in the morning and seeing a guy wearing a pilot’s attire behind an engine that was built in the early 1900s. That is the Le Clerget 98 engine designed to be used during the first World War.

The “Hercules” is a two-row 14-cylinder engine produced by Bristol Engine Company and was used by many planes in WWII.  Some planes needed an extra push for their engines to start for a lot of reasons – though some just didn’t have starters. The Avro 504 is the most produced WWI plane of its type and had an air-cooled rotary piston engine.

The B-36 Peacemaker’s humungous engine is also in the video. Its Pratt & Whitney R-4360-53 Wasp Major has 4 rows and 28 cylinders. The Pacemaker uses 6 of these with each producing 3,800 hp during take-offs.