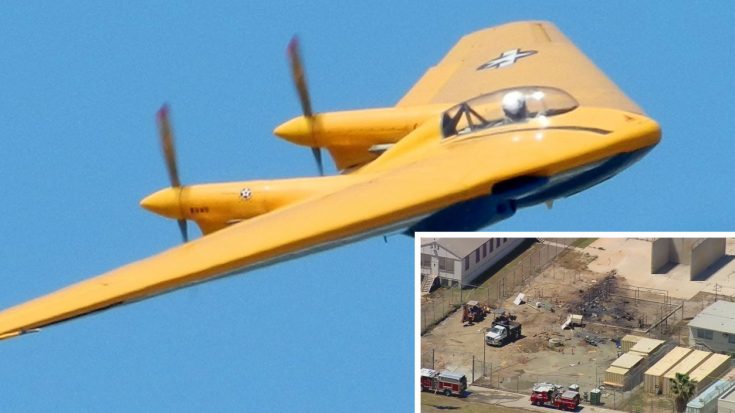 On April 22nd, 2019 at about 12:00 p.m. (PST), an aircraft crashed into the California Rehabilitation Center prison yard in Riverside County, California. So far, only the local KTLA5 news is covering the event as the story develops, with the local police department releasing the following statement on Twitter:

#Norco Update: RSO can confirm that the Coroner’s Bureau is at the scene and assisting with the fatal plane crash. Unknown number of occupants on the plane. No other details available to release at this time. https://t.co/zV2QBLqx0n

The only other information from local reports indicates no one on the ground was injured.

UPDATE: The local coroners office has released the pilot of the aircraft perished in the craft.

This aircraft was owned by the Planes of Fame Museum in Chino, California as it was the only airworthy airframe in the world until now.

The N-9M was designed by the Northrop company in the early 1940s, emerging from a contract to create a long-range bomber. Jack Northrop believed that aviation needed to steer towards the flying wing design to reduce drag, create lift and improve the overall performance of aircraft.

The Northrop N-9M made its debut in December 1942 at Muroc Dry Lake Bed (later Edwards Air Force Base), went through several hundred hours of flight testing over the course of three years and was even test flown by Bob Hoover and Chuck Yeager.

“The flight control system consists of a conventional control wheel connected to elevons and rudder pedals operating split trailing-edge rudders independently. Elevon surfaces (combined elevators and ailerons) are deflected together for pitch control and differentially in opposite directions for roll control.”

There were only 4 prototypes made during the aircraft’s development and as soon as the program was canceled, all but one was scrapped. The remaining airframe rotted in a scrapyard in the desert until Planes of Fame rescued it some 30 years later in 1982.

It took the museum another decade and thousands of volunteer hours to restore the aircraft to flying status and she flew regularly at airshows since the 90s. Sadly, she will do so no longer.