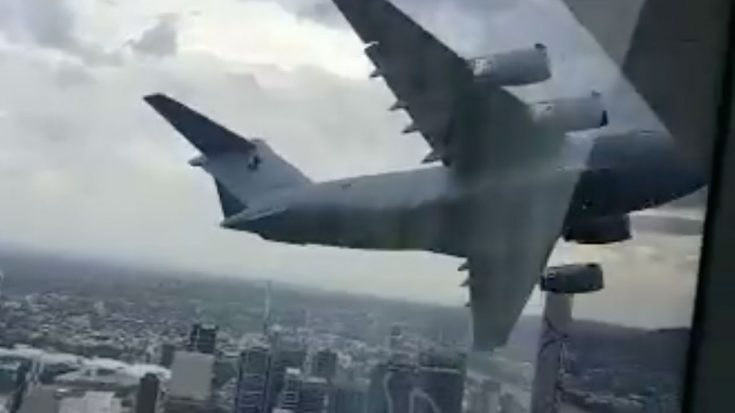 You’ll Never See Something Like This Here In The States.

As of October 2018, this is the finest, best, closest and coolest C-17 Globemaster III flyby of all time and trust us, here at World War Wings we’ve seen hundreds of them. This behemoth cuts right between buildings while a guy is literally filming it from his window, but the kicker here is that it was no fluke.

It was just a regular airshow in Australia.

Now, don’t get us wrong. We love the airshows here in the United States including Oshkosh, the Blue Angels, Thunderbirds and all our local shows, but the FAA is incredibly strict. This is also why we rarely have anything wrong go at any of them.

BUT, to be honest, with fewer rules airshows would be much cooler à la the 1980s airshows we’ve enjoyed in the past. This still holds true for the RAAF (Royal Australian Air Force), however.

What you’ll be seeing is an airshow in Brisbane, Queensland, Australia. Although we’ve gathered a lot of footage of this airshow in the past few years (including an F-111 Aardvark doing a dump-and-burn between city buildings), we’ve never seen a C-17 cutting between them like that.

We hope you enjoy this as much as we did because this never, ever happens in the United States.