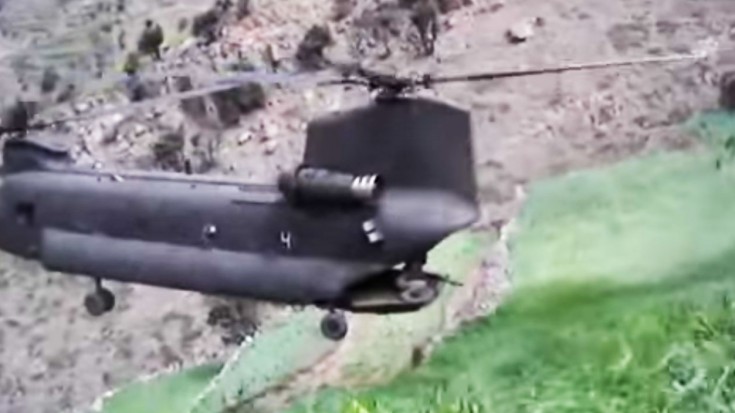 They’ll Pick You Up Anytime, Anywhere.

Chinooks are one of those helicopters that you’re happy to see on the battlefield. They’re either dropping you off at your target, or picking you up after it’s all over. The thing that makes them so special however, is the fact that they’re incredibly nimble and can get you out of anywhere. Also, their pilots are incredibly skilled as well. This you’ll clearly see in this video.

At 1:34, you can see one of the soldiers escorting a blindfolded prisoner too!

We tried to track down the unit and get some information about this video, but couldn’t find any concrete evidence as to where and when this happened. By the looks of it however, it does look like they’re somewhere in the hills in the Middle East. Since the terrain is mountainous and rocky, setting your bird down on a flat surface is unlikely, but hey, Chinooks and their crews can just back it up!

The maneuver in the video is called a “pinnacle maneuver.” It involves the Chinook to hover while it places its rear landing gear on the surface for extraction. It might seem easy for some, but it takes the whole crew to achieve this, not to mention usually, like in this case, the angle of the mountain side shortens the clearing for the blades. One mistake, and…you can imagine what happens.