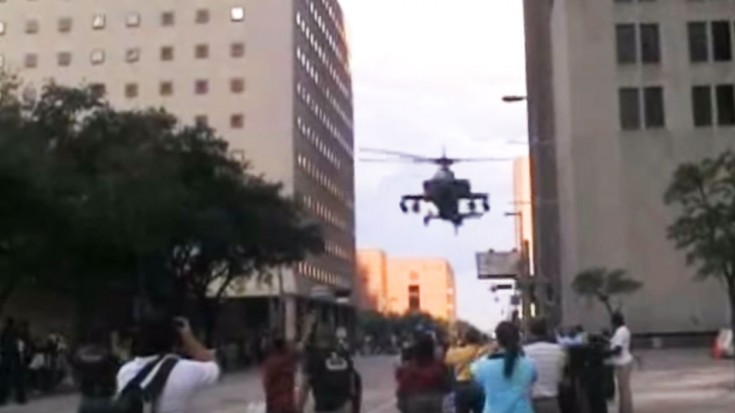 Have You Ever Seen Anything Cooler Than That?

We always love to show you epic flybys. If they’re low, loud, fast or a combination of those three, we find them share them with you. What we’re about to show you however is beyond awesome though.

We might be about nine years too late on this one as it happened during Veteran’s Day in 2007, but this incident is till impressive after all these years. During the parade in Houston, not one but three Apache helicopters cruised through a busy downtown street.

Boeing AH-64 Apaches are attack helicopters that were introduced into service in 1986.

They flew right between buildings and from the looks of it, they were some 30-40 ft. above the street. Now, we’ve seen some great airshows in our day, but how was this even allowed to happen? Trust us, we have nothing against this whatsoever, but with FAA regulations restricting everything that looks remotely fun, it’s surprising that it was allowed.

As for the footage itself, it was captured by someone at the parade. It’s really shaky and choppy, but the person recording explained that he was trying to take pictures with his other hand at the same time. We can’t blame him for that, and even though the video isn’t perfect , it still captures one of the neatest flybys we’ve ever seen.