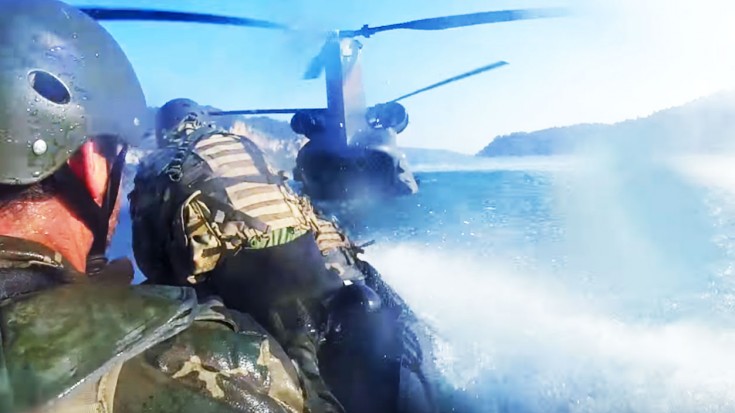 That’s How You Get It Done!

By carefully investigating and studying this video, we’ve deducted that this exercise was part of the training of the Spanish special forces. The thing that gave it away was…their Spanish flag patches. We know, we’re really quite perceptive.

As for the exercise itself, it’s really quite spectacular. As special forces are typically inserted into dangerous and secluded areas, picking them up after a mission is crucial. It has to be done fast and efficiently, which is what was practiced here.

None of us here are Navy SEALS or anything, but as cool as that was, the point is to drive that boat as far in as you can, not pull it in by hand. Need more practice!

CH-47 Chinook helicopters are wonders of engineering. They can sit atop water for about 20 minutes without sinking, but also they have the capability of flooding the main compartment for easier extraction.

This video, shot both from the inside of the helo and the special forces boat, gives some epic viewpoints of the operation. The Chinook first floods its compartment, then, the boat forges ahead to go inside it.

Although really well shot, the operation was not that smooth. We’ve shown you other extractions which show the boat literally plunging into the Chinook all the way to the back. Jumping out, the guys tied the boat down in under 30 seconds and they were off. These guys fumbled a bit. That’s probably the reason they’re “practicing.”