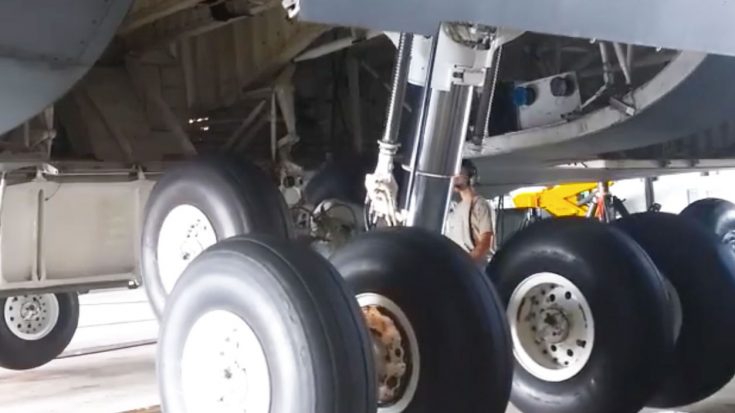 The C-5 Galaxy is one massive plane. Empty, it weighs 380,000 pounds and can carry a payload of 270,000. If you look up some pictures online, you can see these transport planes birth anything from tanks to other planes. Yes! Other planes. When you strip off an A-10 Thunderbolt’s wings, for example, you can literally fly the plane inside the plane to its destination. The thing’s massive is what we’re getting at.

In order to carry such a massive load, however, the C-5 has a few tricks up its sleeve. For one, the main landing gear has a total of 28 wheels. This helps distribute the weight evenly across the entire platform. Also, the gear “kneels.” As the plane is massive, loading it using lifts would be a pain. For this reason, the front gear can lower itself to truck bed height to make loading much easier.

As for the landing gear itself, you can only imagine it takes up a lot of space. For this reason, it rotates 90 degrees when it’s being retracted. Check it out in this video. It’s pretty neat.