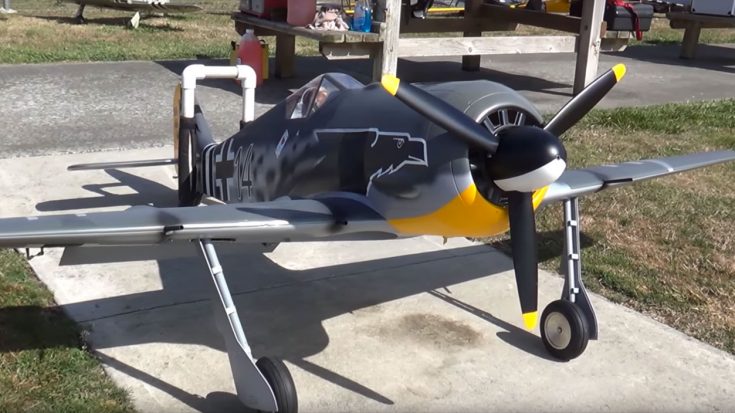 The Focke-Wulf 190 did not things easy for Allied fighter pilots during World War II. The Fw 190 displays amazing speed, agility and powerful weapons in aerial combat. The Fw 190 alongside the Bf 109 were the mainstays of the German Luftwaffe. Its large engine made it ideal for dogfights against planes such as the Spitfire. The Fw 190’s heavy armor also made it viable for ground attacks. German pilots favored the Fw 190 over the Bf 109 for its performance in low attitude and above 20,000 feet.

“Such sparkling performance combined with the 190’s superior armament presented Allied pilots with a real challenge until German pilot training began to drop in quality. The standard Fw 190A was quickly modified to perform a number of roles, particularly that of fighter-bomber in the F and G versions.”

Despite producing over 20,000 Fw 190 units over the course World War II less than 30 remain today. It is hard to obtain an Fw 190 but it’s a littler easier to get your hands an RC version. The folks at Top Flite have created a 1/5 scale Fw 190 that handles beautifully. Take a quick peek at just how well it flies at this RC gathering.